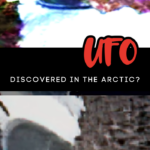 Antarctica — it’s a white and barren land full of snow, ice, and — UFOs?

One researcher — known only as Chuck W — was examining satellite maps of the arctic, and found what he determined to be a UFO hidden among the snow drifts and ice of the white landscape.

So, he did what any researcher who stumbled upon such a gigantic find would do — he submitted the footage to YouTuber MrMBB333, who immediately made it into a conspiracy theory type video.

This YouTuber theorized that the melting polar ice caps made this alien spacecraft — supposedly abandoned thousands of years ago — visible in the photos taken by satellite.

MrMBB333 thinks that this “ship” is roughly 60 feet wide, and that it was obviously made “like it was intelligently designed,” with very symmetrical features.

He zeros in on the fact that there are signs of something like a shadow below the object (Look closely, do you see it?), and when the photo is enhanced, there is what looks to be an “elevated circle” at the “top” of the structure.

There are comments in favor of the alien theory, and comments stating that it is simply a water source that happens to look like an alien spacecraft.

It doesn’t look stuck in the ground, it looks like it’s hovering. The black area under it looks like a shadow and if you look to your left, you will see a light source which looks like it’s coming from inside of a cave or tunnel. This is a very interesting find.

It’s a pool of water from the melted ice. There are similar such pools scattered around the area. The image has been rotated 180 degrees to mess with the shadows and make it appear as though the object is protruding out. If you correct the rotation then the shadows clearly show it is concave rather than convex.

Now, I’m not saying that it IS or ISN’T a flying saucer — but the clip has gotten so much attention that The History Channel even featured it in one of their own YouTube clips.

You have to decide what YOU think. Is it a UFO? Is it a water source that is playing tricks on the eyes? Is it hovering? Is it something stuck in the snow? What do you think?