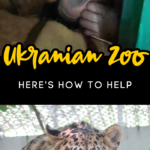 There’s a group of potential casualties from the Russian invasion of Ukraine that nobody stops to think about: the animals at the zoo.

The Nikolaev Zoo is located in Mykolaiv Oblast, Ukraine, and they are currently operating under “wartime mode.”

All the animals are still there, but the staff has been drastically cut to the bare minimum. Some keepers have gone to fight Russia on the front lines, some have evacuated to other countries.

Think of how scary it is, not only for the employees that remain, but all the animals that are living in the middle of the invasion.

It makes me so sad to think of all those stressed animals.

The animals have no idea what is going on, but you better believe they are feeling the anxiety in the air. They hear what is going on — the bombing. They may not know WHAT is happening, but they know SOMETHING is going on.

Every day we go to work, feed and clean the animals despite the howl of the air raid siren.

This zoo, in the south of Ukraine, is home to big cats, primates, polar bears, hippos, lions, zebras, wolves, and elephants, and many other species of animals.

As you can imagine, it takes some work — and money — to keep these animals alive and thriving. Only, the zoo isn’t bringing in any money right now, what with a war going on in that part of the world.

Volodymyr Topchyi, the director of the Nikolaev Zoo, is reaching out and asking the world for help. He has opted to stay — even though the zoo has been bombed — to keep the animals as safe as possible.

How can you help the Nikolaev Zoo?

Helping is easier than you think, and it can be easily done right from your phone or computer.

You simply jump on their website, and order an e-ticket to the zoo.

Sure, you won’t actually be showing up at the zoo, but your money will help take care of those frightened animals that are in danger. Not only are there actual bombs flying through the air, but the animals have to eat.

Your funds will help ensure that the animals can stay fed and cared for during this tough time.

To purchase an e-ticket to the Nikolaev Zoo, simply go HERE. Y’all, it’s only like 5 bucks US dollars.

Every ticket sold goes directly to the care of the animals.