Walmart Just Raised The Hourly Pay Rate To $15 For Nearly Half of All U.S. Employees 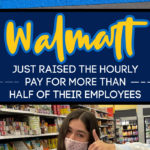 Walmart. They are the largest private employer in the U.S., and working for the retail GIANT just got so much better.

According to Yahoo Finance, those employees of Walmart who work in the stocking or digital workgroup are getting a PAY BUMP to anywhere from $13 to $19.

This pay increase is going to go into effect on March 13, so if you work for Walmart, be watching your paycheck.

With Thursday’s pay raise announcement, Walmart now has about 730,000 U.S. store associates, approximately half of its workforce, earning $15 or more per hour.

Back in September, Walmart surprised a bunch of their hourly associates by raising the amount they are paid.

Team leaders are NOW paid between $18 and $21 an hour, while Deli and bakery workers pay now STARTS at $15.

Walmart also decided to raise the pay for houly auto care center workers, though they didn’t disclose how much they would now be paid.

We completed a strong year and a strong Q4 thanks to our amazing associates. They stepped up to serve our customers and members exceptionally well during a busy holiday period in the midst of a pandemic. Change in retail accelerated in 2020.

The capabilities we’ve built in previous years put us ahead, and we’re going to stay ahead. Our business is strong, and we’re making it even stronger with targeted investments to accelerate growth, including raises for 425,000 associates in frontline roles driving the customer experience,

Things are only looking up for Walmart at this point, and they are passing their good fortune on to their employees.

This is an investment in our people, at the same time we make new investments in our supply chain, automation, and technology.

Whatever your role, know that we’ll continue to support and invest in you. This is especially true for our hourly associates: 75% of our Walmart management team began as hourly associates, and we’re committed to offering strong wages, valuable benefits, and training and development opportunities that allow someone to grow a career with us.

John Funer, himself, started as a part time employee in the garden department back in 1993.

He is now the U.S. CEO, so you KNOW Walmart really invests in their own people, promoting from within when possible.

If you work at Walmart you already know this, but Walmart has raised their starting wages 50% since 2005.

And, they are at it again!

Walmart employees will get raises according to where in the U.S. they live.

We will be sensitive to geographies. There are parts of the country where the starting wage should be lower than others. And we’re obviously really well aware of what’s happening nationally with this discussion around $15 and think that that’s an important target, but also think that that should be paced in a way that’s good for the U.S economy. And you can kind of see us as a model, working through how that works, but I’m really excited to raise the wages today for so many people.

The Walmart frontline workers have really stepped up their game in the months since the pandemic started.

Furner credited the frontline workers as “the reason we’re in such a strong position right now.”

3.2Kshares
This Starbucks Spring Fling Frappuccino Will Have You Dreaming Of Warmer Days
← Previous
Eggo Is Releasing Stuffed Pancake Bites That Ooze With Chocolate
Next →
Click here to cancel reply.