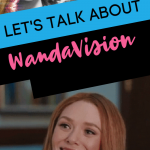 Oh. My. Gosh. Did y’all see WandaVision this week? It dropped on Friday, and I have already seen it THREE times!!

You kind of have to watch it again, and again, so you can catch everything that happens. There is so much to this new episode — to ALL the episodes, actually — and I love it!!!

So, last week, the show was in full color for the first time, and we seemed to be situated in the 1970s. You can’t miss the throwbacks to the Brady Bunch house — Vision is even setting up a swingset in their backyard at one point!

Wanda gave birth to twins (who she named Tommy and Billy — her twins from the comic series), and we find out that things may not be what they seem in this idyllic little town.

Then, SPOILER ALERT, we learn that Geraldine has knowledge of Ultron and the outside world. At the end of the show, she even leaves the confines of the sitcom, and drops into a field in the “real world.”

If you go back and watch ALL the episodes, there have been TONS of Easter Eggs that point to other things in the MCU, that might give us little clues as to what’s happening.

THIS week, oh my goodness, we learn SO much!! We are no longer in the weird perpetual sitcom with Wanda and Vision. We have gotten rid of the sitcom format, and we are back in the world of the MCU.

You have to have a working knowledge of the MCU, and all the movies involved, to have a grasp on what is now going on in this wild show.

We learn that Wanda and Vision are actually stuck in the middle of a sitcom that is appearing on television in the “real world.”

The sitcom has been discovered by members of S.W.O.R.D., who are watching it to find out what is going on with Westview — the little town in the sitcom.

We also know this is all taking place after Avengers: Endgame, because those who disappeared in The Snap, are reappearing.

Okay, we learn that Geraldine is actually Monica Rambeau in the MCU — or ‘Lieutenant Trouble” in Captain Marvel — and her mom created S.W.O.R.D.

Some fan favorites are back in this WandaVision episode: Dr. Darcy Lewis from the Thor movies, and Jimmy Woo, who was in Ant-Man.

Remember that helicopter that Wanda pulled out of the bushes in WandaVision episode 2? We learn that it is a drone from the “real world,” but we still have no idea why it ended up in color.

And, that beekeeper in episode 2 that crawls out of the manhole? We learn he is a S.W.O.R.D. agent dressed in a beekeeper’s uniform — the kind that the agents usually wear in the comics.

We also learn there is some kind of energy field surrounding the town, and people can pass through this field, but we have no idea why or how.

As far as we know, the only people to have breached this energy field are the beekeeper and Monica (who ends up as Geraldine in the “sitcom”).

There is so, so, so much more to the episode. I’m going to have to watch it about 5 more times to catch everything!!

What are YOUR theories on what’s going on in the WandaVision universe?