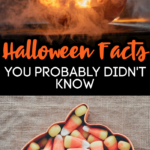 There are all sorts of weird facts, theories, and conspiracies surrounding Halloween, and we are HERE for it!

So here are some fascinating and crazy facts surrounding this spooky holiday!

Skittles Are The #1 Halloween Candy

I actually didn’t know this! I just assumed candy corn or something else seasonal! But it makes sense I guess!

Halloween Is Older Than Christianity

Halloween began as a Celtic festival called Samhain, which means ‘Summer’s End”. They would hold a the feast on the final day of the fall harvest. People in Ireland, the United Kingdom and Northern France used to ward off ghosts by lighting sacrificial bonfires and wearing costumes.

Trick-Or-Treating Has Been Around Since Medieval Days

Although it was referred to as “guising”, children would walk the streets of Scotland and Ireland in costumes asking for food or money in exchange for songs, poems, or ‘tricks’.

Jack-O-Lanterns Used To Be Carved Out Of Potatoes, Turnips, and Beets

I’m trying to imagine a jack-o-lantern beet! Jack-o-Lanterns originated in Ireland and were carved out of potatoes, turnips, and beets. It wasn’t until America started celebrating Halloween that pumpkins started being used.

Illinois Produces The Most Pumpkins In America

Five times as much as the other states to be exact. 500 million pounds of pumpkins come out of Illinois each year!

The Goelitz Confectionery Company originally sold this candy in boxes with a rooster on the front in order to appeal to the agricultural roots of America, and called it ‘chicken feed’ as a fun pun. The name changed, but the recipe has barely been touched since the 1880s.

The Michael Myers ‘Mask’ Was Actually Of William Shatner

The Michael Myers iconic mask is literally William Shatner from Star Trek, painted white, with the eyes cut out. How did I not know this?!

Are you as shocked by some of these facts as me? Be sure to stay safe this Halloween!