Halloween is almost here. Kids are anticipating the coming sugar binge. Devil worshiping teenagers are stocking up on black cats. The inflatable décor industry, or Big Tacky, is getting a huge economic boost. Scary movies are on TV. And Christians have something else for a month to complain about.

You may ask, “But Nik, you spurting fount of theological wisdom, aren’t you a Christian?”

I sure am. But this weekend I was putting up my Halloween decorations and a boy was watching me. He said that he liked the scary stuff but he couldn’t celebrate Halloween because his mom said, “It’s the Devil’s Day and we’re Jesus loving people.” That puts me in an awkward spot because I’m a Jesus-loving people. I’m on the board of my Pentecostal church. I’ve grown up in southern churches by way of the Ozark Mountains. We’re tongue-talking, pew jumping, lying on hands and casting out devils, kind of holy rollers. But I’m also Irish with old pagan roots. My folks came to Missouri and brought with them a love of supernatural farming celebrations and love of the Almighty. In short, I come from the folks who invented Halloween and the folks who invented hating Halloween. 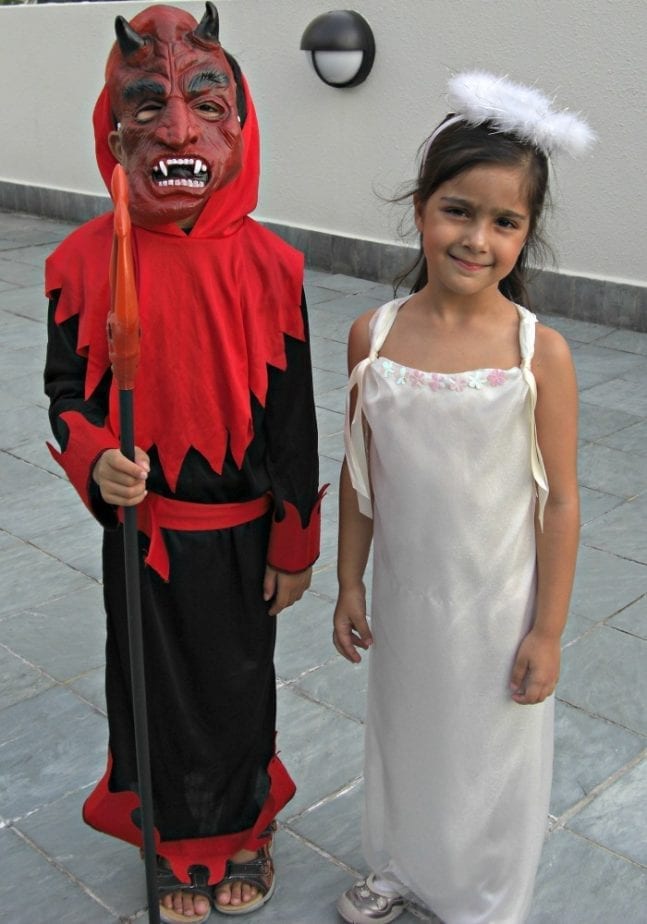 Why I Love Jesus And Worship The Devil

Halloween is my favorite holiday. No contest. It doesn’t pretend to be anything more than what it is. Consider Thanksgiving. Thanksgiving is about coming together as a family but we all hate our family. Too many of us have that weird uncle that made us sit on his lap for waaaay to long. Or the drunk Aunt who insists that not getting married and having kids has made her the “Cool Aunt” and she tries to give you twenty bucks to prove it but you know that she’s broke and probably eating cat food so you try to be cool about not taking the money. Holidays are weird. And Christmas is about the birth of our lord and savior, right? Of course it is. That’s why we drop a cool grand on toys and televisions every year. That’s why we kill each other on Black Friday so we can get a Playstation 4 at half price. It’s for Jesus, right? But Halloween doesn’t put on airs. Halloween is about ghosts and candy, and for one night that’s exactly what you get. It’s an honest holiday.

Halloween is also the great equalizer. Doesn’t matter if you’re rich or poor, doesn’t matter the color of your skin; if you’re a Ninja Turtle then you’re welcome anywhere. I live in a pretty well-off neighborhood and we get a flood of, um…less financially sound families of questionable citizenship status. That’s awesome to me. My neighborhood is as President Reagan said in his 1988 Halloween address, “A haunted city upon a hill whose tombstones guide candy-loving people everywhere.” It is literally the only night of the year where you can stay up late, gorge on a nearly unlimited supply of sugar, play in the streets, and it’s not only allowed but also encouraged. And everyone can do it. You don’t have to know the Power Ranger beside you to have a good time. I’ve seen Loki play with Thor. I’ve even seen Stormtroopers swap candy with Jedi Knights. For one night the playing field is level. Every child gets what they want and no one is left without.

I don’t know about a lot of my fellow brothers and sisters in Christ, but bringing joy the masses is a pretty big deal even if you have to be covered in fake blood to do it. And nobody is fooled by trunk-or-treat. Is your kid still dressed as Captain America? Still hitting people up for candy? Guess what? You’re still participating in Halloween only now you look like an elitist snob who’s afraid of the outside world. Very Christ-like, folks. Either trick-or-treat or don’t, but don’t pretend you’re somehow outsmarting the forces of Heaven and Hell by practicing your faux pagan rituals in a parking lot.

Look, I really don’t care what anyone does on one particular night out of the year. Get candy, go to church, or just stay inside with the lights off. It’s none of my business. I’m still judging you, of course, I’ll just be nice and not tell you. And maybe you’re judging me, too. That’s okay. For as it’s written, “Judge not, lest ye be okay with being judged in return, and in that case, judge all ye want.”

Interesting! Here in the UK halloween isn't such a big deal (even though the shops try to make it one) but we are lead to believe that in the US everyone loves it and although we see you as a super christian country you all seem to forget that for one night a year. My mum hated it, she thought it was worshiping the occult and so brought us up to not participate but I have no problem with it so my kids went trick or treating and carved pumpkins etc. I think it can be a problem for some elderly people who end up sitting in their houses with the lights & TV off on the 31st waiting for it all to be over but in most areas here kids only hit houses with a pumpkin outside or at least some sort of decoration in the window, that way only people with a stash of sweets spend all night answering the doorbell! I guess I'm saying the same as you, hate it - don't participate, love it - have fun

I love what you said about "Trunk or Treat" - - 'You’re still participating in Halloween only now you look like an elitist snob who’s afraid of the outside world.' HA! So true! We participate in actual trick-or-treating but have family that....let's just say, disagrees with our decision. ;-) Clever way to share your perspective. I enjoyed this!