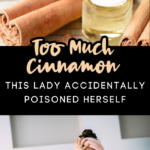 This lady actually poisoned herself with cinnamon, and I didn’t even know you could do that!!

I have a healthy love for cinnamon. I love cinnamon in my Lattes. When I make coffee at home I have to have the Cinnamon Toast Crunch Creamer. I’m a huge fan of Fireball Whisky. And, I especially love the Land O Lakes Cinnamon Sugar Butter Spread (OMG, you HAVE to try it.).

I wouldn’t say, however, that I like cinnamon enough to poison myself. But, that is exactly what this lady on TikTok did.

Way back in 2015, Bridgette Garb loved — obsessive really — cinnamon. She would use it by the TABLESPOON in her oatmeal, she’d use it on her fruit and in her yogurt. She even put it on her rice!

I mean, she liked the spice so much that she would put it on her — wait for it — scrambled eggs. Ew, right? She loved it!

Everything was fine and dandy in Bridgette’s life, and then things started to be not so good anymore.

About a year after she started her obsessive infatuation with cinnamon she started to feel kinda off.

I became frequently dizzy and lightheaded. I developed terrible hypoglycemia and was always pulling muscles and hurting myself. I was taking multiple dance classes at this time and found it difficult to participate and often had to sit out. I knew that it had to be more than just being ‘over tired.’

She couldn’t figure out why she suddenly felt so bad. But, then her father, who is a doctor, stepped up with some answers.

He knew about Bridgette’s cinnamon obsession, and thought maybe that could be the source of her health problems.

After doing some research, he found out that “Cassia cinnamon contains a naturally occurring chemical called coumarin.”

In small amounts, this coumarin isn’t really bothersome. You really probably wouldn’t even know you are ingesting it.

Coumarin is a naturally occurring substance in many plants. Its smell is reminiscent of slight vanilla, and it can be used to add a sweetness to foods.

Fun Fact: Tonka Beans — which contain large amounts of coumarin — are banned in the United States, because massively high doses of coumarin can cause liver problems.

When consumed in excess, [coumarin] can cause many of the symptoms I experienced and others. Upon learning this information, I decided it was worth giving it up cold turkey to see if that would solve my problems.

Guess what. After quitting her obsession with cinnamon, her symptoms IMMEDIATELY improved.

It was the cinnamon!!

I immediately began to feel better after cutting out cinnamon, but it took about a year to get completely back to normal

Now, you can definitely use cinnamon. There are varieties that don’t contain coumarin. It’s just a matter of religiously checking the spice’s label to make sure you aren’t getting one that contains the coumarin substance.

Cinnamon can actually be really good for your health — without the coumarin.

It helps better [the body’s] sugar storage, improves insulin sensitivity in the liver, and helps sugar control. It’s also an antioxidant, therefore it helps neutralize free radicals — preventing them from damaging cells in the body. It’s a brilliant spice — I use it in my tea, cooking, etc., but only a tiny amount…not teaspoons or tablespoons!

So, the moral of the story is, everything in moderation, my friend. There is such a thing as TOO MUCH of a good thing.