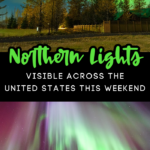 Seeing the Northern Lights is totally on my bucket list!!

One day I WILL travel north enough to see the Aurora Borealis in all its full glory, stretching and waving across the sky.

As it turns out, I might just be able to catch a glimpse of this awesome natural phenomenon without waiting for the chance to travel way up north.

A large solar flare erupted Thursday and is set to reach Earth Saturday, which could result in a strong geomagnetic storm and cause the aurora borealis, or Northern Lights, to be visible across the US and Europe.

If you are lucky, you just might be able to see the Northern Lights in places that you don’t normally get to see such an awesome natural light show.

Weather permitting, the Northern Lights could be visible from Portland Oregon to New York City. It may also be visible on the horizon as far south as Carson City, Nevada, Oklahoma City, and Raleigh, North Carolina.

OMG!! How awesome would it be to see this light show with your own eyes?!?

If you are outside of the United States, you just might also be able to see the Aurora Borealis. People in Norway, Sweden, Finland, and even in parts of Scotland and St. Petersburg, Russia will get to witness this amazing light display.

Now, the Northern Lights isn’t the only things that is going to be affected by this solar flare. You just might notice voltage irregularities, weird things going on with your radio signals, and you may even get some false alarms going off on some equipment.

It’s just crazy to me what these solar flares can do!!

We are focusing on the NORTHERN Lights here, but did you even know there are Southern Lights (Aurora Australis)? Pretty cool, huh?

These Southern Lights might also be affected by the solar flare.

According to CNN, the forecast shows that people from Melbourne, Australia up to Christchurch, New Zealand might be able to see these beautiful natural color waves.

Bottom line? Get yourself outside, and see if you can spot this near once-in-a-lifetime event!!