Baby keep you up all night? Toddler refuse to walk faster than a glacier? Sometimes the best way to survive is knowing someone else is out there being tortured too. Here are twenty stories from the parenting trenches guaranteed to keep you sane for at least five more minutes. 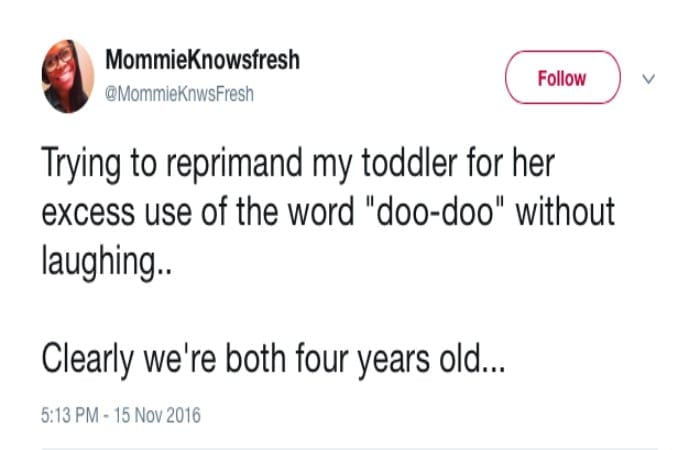 The anti-theft system on my car is just French-fries and crayons.

Watch out, those things may attract starving artists.

I just battle rapped my 4 year-old and rhymed "take a nap" with "piece of crap" so don't tell me about your parenting skills.

This guy knows how it’s done.

On the one hand it's impressive the baby has the motor skills to pick up a grain of cat litter, on the other hand HE'S TOUCHING CAT LITTER

Even the cat thinks that’s gross.

Mom 1: That's my little boy on first base

Me: That's my son spinning around in the outfield singing "Let it Go".

This sounds a lot more fun than waiting to catch a ball.

My wife was gone for two minutes & my son said "I miss Mommy," so I asked if he ever misses me.

I've never heard a 6yo take the 5th before.

This kid should be a lawyer…

ME: your honor I submit a half eaten bagel
LAWYER: objection
ME: he said he’d eat the whole bagel
JUDGE: I’ll allow it
SON: *starts weeping*

…and defend this kid.

One of the hardest things about raising a toddler is trying to figure out if they mean "no-no" or "no-yes".

Right?! And then there’s the, “No I don’t want a drink, WHY ARE YOU TAKING MY DRINK?” epic freakouts.

This honestly makes me feel better about my life.

Parenting is a whole lot of laying in bed, hoping your spouse gets up to investigate that strange noise.

It’s like a game of chicken where everyone loses.

I was just enviously admiring the energy and flexibility of a 3yo and then he kneed himself in the face.

Gotta watch out for those knees!

Trying to reprimand my toddler for her excess use of the word "doo-doo" without laughing..

You are not alone.

Still waiting on a female emoji with dark under eye circles and messy hair holding a dirty, screaming child.

And a male emoji whose kid just stomped his nuts.

Take the road less traveled. Like, the one with the most mud, or the wettest grass, even if there’s a sidewalk nearby.

And stop at every crack to jump over it, especially on sidewalks.

I’m sure there are lots of other important things to do, like clean out the cookies by eating them or stress-test the springs on the couch by sitting on them motionless for hours. Or both at the same time.

me: Did you brush your teeth?
9: Yes
me *hands him a glass of orange juice*
9: Do I have to?
me: Yep. Quit hitting your brother

Creative parenting at its finest.

4-year-old: Are we friends?

Me: Of course we are.

4: Friends let each other eat all the candy.

You know, this wouldn’t have happened if he’d just hidden the candy in the first place.

I'm just a mom, standing in front of my husband, trying to say something that I can no longer remember cause my kid interrupted us 75 times.

My 6 year old found the duct tape and now nothing in my house moves.

MacGyver in training. Get that kid some paperclips and chewing gum.

Me: What do you want to do today?

4-year-old: Be a wolf and fight other wolves.

It should be an interesting day at preschool.

This would make a great movie.

Sorry I chanted "build the wall" while you were setting up the pack n play for your toddler.

I hope she did a victory lap for that one. She earned it.