I read a lot of books, but I read a WHOLE lot of young adult books, and I’ve noticed a few repeats here and there. 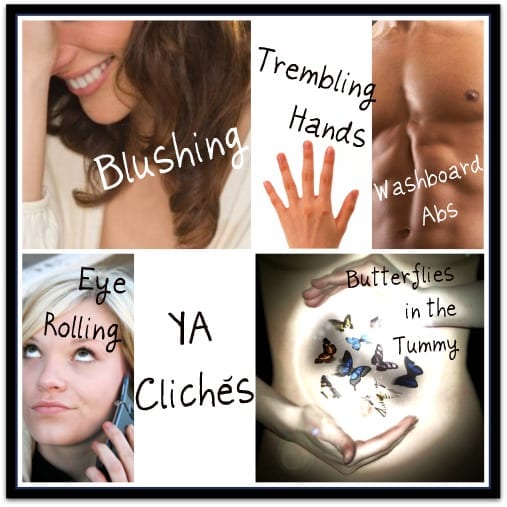 *Notice how I said repeat several times in a row. That was me embracing them. 🙂

I'm guilty of blushing and eye-rolling, but I try to use it wisely. Unfortunately some things are a cliche because they're true. I remember being embarrassed by *everything* as a teen. And eye rolling? Yeah.

However, I don't think I've mentioned washboard abs, though I have mentioned thighs more than once. Justin is a runner. Mmmmm.

Great list. I love YA books also, and I had a good laugh because you nailed them! Thanks for the chuckle (and the great pictures!) .-= Cheryl´s last blog ..Green Home Office Tip: Online Fax Services =-.

I'm a HUGE offender of the blushing-type. But I never use the eye rolling (as directed by my criting group, thank you Jamie). However, now that you mention it, I do have some hand shaking and shivering going-on...maybe I should look into that... .-= Chantal Kirkland´s last blog ..5 Reasons I Hate Spring Break =-.

I think I'm guilty of all but the trembling hands. Although, sometimes my characters get sweaty hands. But, my adult characters are guilty of eye rolling, too. Maybe because I do it all the time myself! Ha, I so never grew up.

My boys don't have washboard abs...they're skinny geek hot. *lol* And my girls never giggle. They gag, they glare, they purse their lips, but they will be caught dead before a giggle escapes their mouths. And their bellies? Hot lava or painful turning, sometimes flipping and flopping, but no bugs.

I am, unfortunately, an eye-roller and sometimes blusher. But never, ever, ever a hand trembler.