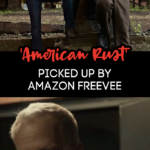 It’s not often that a canceled TV show gets picked up by another network, but it does happen in rare situations.

This is one of those magic moments when the stars align just right for a canceled television Show.

Amazon is picking up a series that Showtime gave the ax to after just one season.

What show am I talking about?

Haven’t heard of it? Let me just fill you in on how season 1 went down.

What Is American Rust About?

Jeff Daniels stars as the chief of police in an impoverished Rust Belt town in Pennsylvania.

Side Note: The Rust Belt is an area of the country that used to be big in the manufacturing sector, but has been on a steady decline for the last 40 years. It runs from Central New York down through Wisconsin.

The show deals with, not only the difficulties of living life in the Rust Belt, but the realities of dealing with the consequences that come with wild accusations and trusting them.

‘American Rust’ is a compelling family drama that explores the tattered American dream through the eyes of complicated and compromised chief of police Del Harris (Daniels) in a Rust Belt town in southwest Pennsylvania. When the woman he truly loves sees her son accused of murder, Harris is forced to decide what he’s willing to do to protect him.

It is kind of surprising that Amazon would decide to pick up American Rust. It didn’t have a great reception during the first season.

In fact, the Tomatometer on Rotten Tomatoes gave the show a measly 27%.

As sometimes happens, the people who actually watch and get invested in the show don’t exactly agree with the critics. The people voted, and American Rust came in at a 75% audience score.

Now, it isn’t Amazon Prime that has picked up the show, but it will stream on Amazon Freevee.

What is Amazon Freevee, you ask?

According to Amazon, “Freevee is a free, ad-supported video streaming service available in the United States and U.S Territories.”

You can access Amazon Freevee by going to the Prime Video app.

Freevee can also be accessed through the Freevee app on supported devices.

Roku, XBox, Playstation, Google TV, and Apple TV are just a few of the devices you can use to stream American Rust.