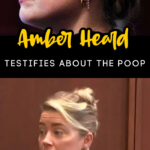 It’s the sh** heard ’round the world.

We have been hearing about this poop that Amber’s friend *Allegedly* dropped in Johnny’s bed.

We have FINALLY gotten to that part of Amber’s testimony in the Johnny Depp defamation case.

I’ve never been so giddy to hear about *Alleged* human fecal matter. I’ve been waiting for this moment for the entire trial!

It’s kind of a psychotic story — but then, she’s proven — in my eyes at least — to be a bit of a psycho herself.

Johnny brought up the bizarre pooping incident during his testimony at the trial.

Here’s Johnny Depp’s Side Of The Poop Story

Back in 2016, Amber was having a big ol’ 30th birthday bash. Maybe at their house — er’ penthouse. It’s not really clear.

Johnny and Amber apparently got in a big fight, and according to Entertainment Weekly, Johnny wanted to leave. He wanted out of the marriage.

Apparently he left the party, I’m assuming to get away from the situation.

Later on, Johnny knew that Amber had gone to Coachella, so he thought it would be a good time to go and retrieve his belongings at their shared residence.

Here’s where Johnny learned there was a problem.

Sean Bett, his security guard, told him that it wouldn’t be a great time to come back to the house.

When Johnny asked “Why?” Bett showed him a photograph he had taken on his phone of Johnny’s side of the bed he shared with Amber.

In the picture was what Johnny could only describe as human fecal matter.

I was shown a picture of what the problem was. I had gone to Mr. Bett and said, ‘She’s at Coachella. I think it’s a good time to go downtown so that I can get some of my things and get them out of there,’ especially things that were precious to me… and he said, ‘I don’t think now’s a good time to go.’ And I thought, ‘It’s the perfect time. She’s not going to be home for two days.’ Then he showed me a photograph on his telephone of… it was a photograph of our bed, and on my side of the bed, was human fecal matter.

Ew. But, I must say, based on everything we’ve heard, this doesn’t seem to be too far of a reach for something Amber Heard would do.

I understood why it wasn’t a good time to go down there. My initial response to that was, I mean… I laughed. It was so outside. It was so bizarre and so grotesque that I could only laugh.

As if the picture wasn’t proof enough, Starling Jenkins III, the security guard and chauffeur for the couple, weighed in on the situation.

His employee, Starling, later told the court Amber had told him it was a “horrible practical joke gone wrong.”

Amber Heard tells her side of the pooping story.

Today, Amber took the stand to tell her side of what happened regarding the poop found on Johnny’s side of the bed back in 2016.

Of course, she denies the claim that she was the one to poop in the bed. Of course.

According to TMZ, Amber claimed that their dog, Boo, had gotten into Johnny’s marijuana stash.

Apparently it upset his tummy, so he took a crap on the bed.

Side Note: Boo is a freaking Yorkshire terrier, and he was a puppy at the time. I’m betting puppy Yorkie poop looks a whole lot different than big ol’ human turds.

Amber said that her and her girlfriends were in the room, getting ready to go to Coachella, and the puppy made a doo-doo in the bed.

Amber Heard Said It Was A Practical Joke

In response to Sterling’s testimony that Amber had said it was a “horrible practical joke gone wrong,” she claims she never said it.

First of all, I don’t think that’s funny. I don’t know what grown woman does. — I was not also in a pranking mood; my life was falling apart. I was at a crossroads in my life. I was really serious. — And I had just been attacked on my 30th birthday by my violent husband with whom I was desperately in love and knew I needed to leave. — It was not really a jovial time, and I don’t think that’s funny. Period. That’s disgusting.

I forgot to mention, Amber claims that Johnny attacked her at her birthday party.

All I know is that there was poop in the bed. TMZ has the picture to prove it. AND, Yorkie doo looks a whole lot different than human dung.

BUT, I’m not on the jury. It will be interesting to see where they fall when this is all over. Will it be a win for Johnny, or will it be a positive outcome for Amber.

I think you know where I stand. #teamjohnnydepp