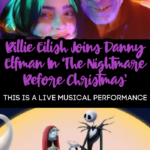 It’s nearly time for the live ‘Nightmare Before Christmas’ event and I can not wait to watch Danny Elfman performing as Jack Skellington and now we’ve learned that Billie Eilish will perform as Sally!

There is a live-to-film event happening at Los Angeles’ Banc of California Stadium, where he will once again become Jack!

What a way to celebrate the genius of Tim Burton’s ‘The Nightmare Before Christmas’!

This is a Halloween event that is finally returning after being on a 3-year hiatus!

Jack Is Back! I was so sorry to have missed last Halloween. (We all know why). BUT- I’m not skipping this year. Jack wants to get back on stage. I can’t wait to see you all.

Danny Elfman said in a statement

The event is taking place on October 29th, 2021 at Los Angeles’ Banc of California Stadium, annnnnd… they added a second date!

You can actually now spend Halloween, Sunday, Oct. 31st, 2021 enjoying “The Nightmare Before Christmas” live-to-film concert experience as this is the second date added to the event!

Billie will perform “Sally’s Song,” with Danny Elfman according to Billboard.

I’m absolutely thrilled to have Billie joining up with the nightmare crew! This will be a real treat (not a trick)!

Danny Elfman said in a statement obtained by Billboard

Danny Elfman will be joined by Ken Page who is the original voice of Oogie Boogie!

Also, “Weird Al” Yankovic will be there as the voice for Lock, there will be more special guests announced as the events get closer!

The performance plan is so cool, Danny will sing with the film as the full orchestra and choir perform the film’s score and songs 100% live.

The concert is family-friendly and is the first-ever film music event held at Banc of California Stadium.

There are also other activities scheduled that include a costume contest and trick-or-treating!

There are some tickets still available for Friday, Oct. 29th, and those have been on sale for a bit now.