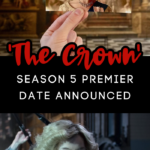 Is anyone out there watching The Crown on Netflix? If you aren’t, you should be!!

The show, which is about the life of Queen Elizabeth II, is going into its 5th season, and a premier date has finally been announced!!

Now, The Crown, which basically swept the 73rd annual Emmy Awards, wasn’t even on my radar until I watched it on a whim, sometime in the 3rd season.

Can you be addicted to a show? Because, that is THIS show for me. It is one of those shows where sleeping comes second to finishing the show. I LOVE shows like that!!

I was (and still am) giddy about this new season, and I almost jumped for joy when it was announced that the premier would happen in November.

Then I paid a little bit closer attention. November of 2022. NEXT November.

Production on The Crown Has, Indeed, Started

The show started filming in July (so at least we know they are working on it!), and they began the taping with a brand new cast.

I’m going to kind of miss the other actors. Emma Corrin was SUCH a good Dianna. I’m sure the new cast will be fantastic — but I hate change.

I do have some totally good news to dish about this show, which follows The Royal Family. This upcoming season was supposed to be the final season, but the creator of the series, Peter Morgan, decided The Crown would go on to a 6th season. YAY!!

I can’t wait to see how “modern” they get with the show. Like, are we going to meet Meghan Markle? What about Archie? Maybe a little Lili? Gah!!

Only time will tell — and time we have — because the season 5 premier of The Crown won’t be happening until November of 2022.