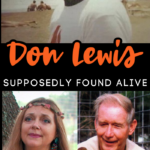 I don’t think I could possibly believe this until I’m given hard proof. But word on the street is…he’s totally alive.

20 years after being declared dead, news is surfacing that Don Lewis, the ex-husband of Carole Baskin is alive and well, and has been hiding out in Costa Rica.

If you haven’t watched Tiger King 2 yet, it touches up on the subject a bit, with more than one source claiming that they worked with him in Costa Rica or lived by him during the time after his disappearance.

Don Lewis’s attorney, Joseph Fritz, came forward saying that a detective had let him know of Don Lewis’s whereabouts and that he is allegedly alive and well…WHAT?!

“They said that my husband, Don Lewis, is alive and well in Costa Rica. And yet all of this hay has been made about me having something to do with his disappearance, when Homeland Security has known where he is at least since back then.”

I’m choosing not to believe it until I see it. There’s waaaay too much confusion and chaos going on since the second season of Tiger King dropped…and I’m here for it!