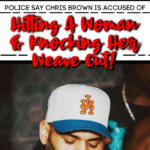 Apparently Chris Brown, the Grammy-winning singer has gotten himself into some hot water allegedly!

I’m a big fan of getting all of the facts and details before vilifying someone and as of now the facts available are slim.

Sometimes things do not happen the way they are originally made out to be, so if he’s guilty we won’t know that quite yet, but here is what we know so far.

According to authorities, he’s accused of hitting a woman during an argument while at a home in Los Angeles last Friday.

NBC News reported that a spokesperson for the Los Angeles Police Department told them that officers had responded to a report about an argument.

This was at a residence located at the 19600 block of Citrus Ridge Drive in Los Angeles, which is the San Fernando Valley area.

As of right now, it is being investigated as a battery and the incident will be referred to the Los Angeles City Attorney’s office.

TMZ reported that the woman involved said that Chris Brown had smacked her in the head.

She says he smacked her hard enough to knock her weave out, that’s quite a hit!

It seems that other than the weave being knocked out, there were no actual injuries reported and it isn’t clear if Chris Brown will face any charges.