Furniture. Every time things get tough I move furniture. Am I alone in this?

It’s sort of a joke in my family that we don’t particularly like change. And by “joke” I mean one of those things that’s funny until it’s not. My grandmother, for instance, has not moved a stick of furniture within my living memory. Which is a comforting thing in a grandmother, really, because I still check all the secret candy stash locations.

So is it weird that I move my furniture when I get stressed? 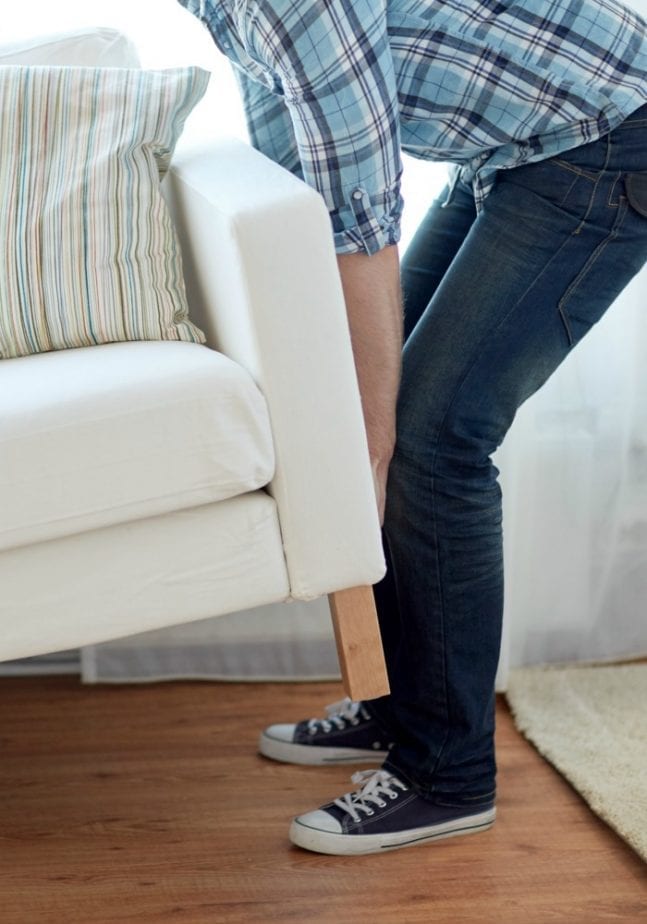 Confession: Every Time Things Get Tough, I Move…

Actually, it’s pretty logical. Maybe not practical, but there’s sense to it. Look at all the stress busting components that go into turning your space around:

1. It gets your blood moving. Exercise reduces stress hormones, like cortisol, and stimulates endorphins, which are the body’s natural painkillers and mood elevators. Plus it’s the right kind of exercise. Studies show that a low to moderate-intensity workout makes you feel energized and healthy, without defeating the purpose by knocking you flat on your back unable to move. (Lying around I don’t need help doing.)
Even five minutes of aerobic exercise can have anxiety-reducing effects. Though I hear you’re supposed to do more than that. And, you know, all the time or some craziness.

2. It’s not work. People who take breaks from work are more productive when they are working. It sort of reboots the cognitive processes. Workers who take vacations (real vacations, for a week or more) actually get more work done than workers who don’t. Even just during a normal work day, it’s good to take a mental breather. Set a timer for 50 minutes, then take a break for ten. Walk the dog. Read your blogroll. Do a quick task on your to-do list. Come back to whatever you’re doing with a new perspective.

3. It’s not work, part two. People who have hobbies are also happier and less stressed. (Not that rearranging furniture is a hobby. Or that I’m particularly good at it. But just go with it.) Choosing a hobby that plays to your skills can boost your self-esteem and sense of well-being. I knit, and not only do I just enjoy the process, I love the feeling after I finish a project. It’s a check in my “win” column, and how often do we get to do that?

4. Speaking of control…you have it. And it feels goooood. Because, you know, that’s totally how life goes: always according to plan. Except not really, and that’s when it can be irresistible to go and do something, maybe something drastic, just to feel like you have power over something. This is how I ended up with a pixie haircut that made me look like a tomato. When you’re under stress, it’s not the best time to make permanent decisions. But hair grows back, furniture is movable, paint is repaintable. An involving project distracts you from your anxiety and gives you a sense of accomplishment.

5. A body in motion tends to stay in motion. You know when you feel so overwhelmed that it all just mows you flat and you don’t know where to even start and so you don’t? And the couch spins a sweet siren’s call of comfort or at least the oblivion of Netflix and Diet Coke? Let’s be honest—the kids can have frozen waffles for one dinner. But if you come to a full stop, inertia is not your friend. Trust me, you don’t want to get to the point where you need a good friend to come over and say “stop lying on your couch and maybe go take a shower.” (The couch is not a good friend. It is a false, false friend.)

So if you’re like me, it goes like this: you get up to get a Coke from the kitchen, come back, decide the couch you’ve been flopped on for five days would have a better view of the TV from over there, and four hours later everything is in a different place and you don’t even feel like lying on the couch anymore.

And if you’re like you, you do whatever it is that shakes you off the couch and out of your funk.