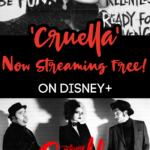 Disney’s ‘Cruella’ made a huge debut in theaters as well as on Disney+ Premier Access this summer!

I haven’t watched it yet, but one of my daughters did go to the theater to see it and loved it.

In fact, she told me yesterday that ‘Cruella’ would be coming to Disney+ today (Friday, August 27th) to stream for free and that I better not watch it without her…

Hmph… The kid is out of town and put me on restrictions!

However, she has no rule over the rest of you so I had to make sure that you knew that as of right now if you are a Disney+ subscriber you can stream Disney’s ‘Cruella’ movie for FREE!

I love Emma Thompson and I can not wait to watch her in her role as Cruella!

It’s so exciting to know that a ‘Cruella’ sequel was confirmed a few weeks back and Emma Stone should be returning to the role.

So, even though I have to wait until Sunday to watch ‘Cruella’ on Disney+, you don’t have to!

Make sure you go stock up on some fun movie snacks, maybe grab yourself a Cruella-themed Starbucks drink while you’re out too!

If you don’t have Disney+ already you can sign-up super quick here!