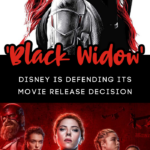 You may have heard in the news that Ms. Black Widow herself, Scarlett Johansson, was suing Disney for simultaneously releasing her new movie in theaters and on Disney+.

She claimed this was a breach of her contract with the movie studio, which allegedly said that Black Widow would be released exclusively in theaters.

Of course, this contract was signed pre-COVID. Pretty much the whole world has changed since then.

When the contract was originally signed, there was virtually no existence of movies being co-released on streaming platforms.

Johansson’s lawyers are saying that it doesn’t matter. They say that Disney, who is the parent company for Marvel, was (and is) fully aware of what the contract stated.

The whole thing came about because Scarlett is saying that the move to release the movie simultaneously on Disney+ could cost the actress an estimated $50 Million (more than I will see in a lifetime).

Which might have been true before this whole COVID debacle took place.

The lawyer is also saying that this move by Disney is solely to boost subscribers to the Disney+ service.

A spokesperson for Disney says that this lawsuit holds “no merit whatsoever.”

Disney is saying that they have completely complied with their agreement with Scarlett.

The release of Black Widow on Disney+ with Premier Access has significantly enhanced her ability to earn additional compensation on top of the $20M she has received to date.

According to Bob Chapek, the newest CEO of Disney, this new hybrid way of dually releasing films is “the right strategy to enable [them] to reach the broadest possible audience.”

I have to say, I don’t think he’s wrong. My family has not been to theaters since this whole coronavirus mess started.

We have, however, watched a few movies on Disney+ with Premier Access that we might not have gone to in the theaters. Raya and the Last Dragon, Cruella, and Black Widow are a few examples.

Now, since my husband is a huge Marvel nerd, we might have gone to see Black Widow in theaters, but not willingly. Ha!

Disney isn’t the only studio that has had to scramble to figure out how to release films during the pandemic. It’s just the nature of the beast at this time.

How do YOU feel about the Scarlett Johansson lawsuit and the studios releasing movies on streaming services?