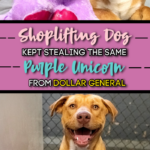 This is kinda the sweetest story ever to come across the social media pipeline.

A Dollar General store in Kenansville, North Carolina had to call animal control, because they had a repeat-offender shoplifter.

Why did they call animal control for a shoplifter?

Well, THIS offender just happens to be a cute stray DOG named Sisu.

It seems, there was a particular purple unicorn stuffed animal that caught the doggo’s eye.

He kept going in the Dollar General location and trying to take the SAME EXACT purple stuffed unicorn out of the store.

Instead of “throwing the book” at this adorable pup, when animal control came out to pick up Sisu, the officer bought the unicorn for the pup.

Now Sisu never has to be without his unicorny friend.

He was taken into Duplin County Animal Services, and was almost immediately adopted out by an approved adopter.

But, this wasn’t before Duplin County Animal Services did a photo shoot with the pup and his new best friend.

Looking for another feel-good doggo story? You have got to read about how this woman built her dog a custom stairlift.

How cute! Dogs are too funny