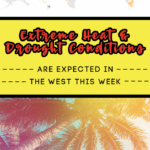 ICYMI there is a horrible heat wave making an oven out of the western part of the United States, so you may want to put off that summer road trip to Disneyland that you had planned.

Have you ever been there?

The heat plus the humidity is making everything sticky and unbearable — and I’m not even in the hottest part of the country!

According to CNN, there are going to be close to 275 (TWO HUNDRED AND SEVENTY FIVE!!) heat records set in the western U.S. over the next week or so.

I used to live in Southern California — it’s not all swimming pools and movie stars out there — it can get TOASTY hot, like I’m talking 110 degrees as you get closer to the Death Valley desert.

And, it’s a dry heat — so, when you open the front door, it’s LITERALLY like sticking your face straight in the oven!!

But, here’s the bad news, it’s going to get even hotter than usual in that part of the U.S — I feel sooooo bad for y’all right now.

And, it’s not just California — those poor people in Arizona are suffering through it, too!

Alright, Alright — that’s a bit of humor for you — it’s REALLY going to be more like this.

Still not a pretty forecast for Phoenix. *Sad Face Emoji*

Not only is the west having to deal with the SCORCHING temperatures, but they are currently in a drought situation.

Conditions of the drought in the western part of the U.S. were already classified as “critical” and “extreme.”

These soaring temperatures aren’t going to do anything but strengthen the intensity of these dry conditions.

Record-high temperatures will just continue the vicious cycle that so often happens in droughts, where hot, cloudless skies result in increased evaporation of what little water is left in lakes and rivers. This, in turn, worsens the drought.

Every year, about this time, California goes into fire-watch, with dry conditions making fire danger a real possibility — remember the fires from last year?

That fire danger is only going to be WORSE, with the outrageously hot temps coupled with the intense drought conditions.

I can tell you from experience — it doesn’t rain very much in southern California — that sounds kind of like a good thing, but it can be DRY and HOT!

I can’t speak for the REST of the western U.S., but it ALREADY only rains a handful of times a year in southern parts of California, and it’s already started off worse this year (hence, the drought).

This has a clear fingerprint of climate change, where increasing temperatures will drive this vicious cycle, especially in places like the Western U.S., where rainfall has been noticeably lessening.

And, it’s not just Arizona and California that are having to deal with these conditions — although those are the states I think of when I think about DRY HEAT.

There are currently 12 states that are in this dangerous heat advisory — we’re talking almost unheard of triple digit temps as far as Montana!!

Excessive heat warnings are in effect for as far north as Montana. The National Weather Service (NWS) in Billings is forecasting highs Monday and Tuesday to surpass 100 degrees and shatter all-time records set as early as 1918 in Sheridan.

So basically, it’s going to be oven-hot in the west, and especially since they are in a severe drought, there is a real danger for fires.

Now, places like Lake Mead in Nevada and Lake Havasu in Arizona rely on monsoon rain season to fill up their water reservoirs — but it looks like that isn’t going to be happening this year.

Monsoon awareness week began June 13, but the monsoon has yet to make its appearance. The Climate Prediction Center monthly outlook for June shows persisting drought conditions and little in the way of moisture.

We will be thinking about you, western U.S., and we’ll be crossing our fingers and toes that you get some much-needed rain soon!