So, my family is straight up country. Well, as it turns out, they also happen to live in a place where rare Pokemon spawn. (If you want to know more about the game, you can find my tips and tricks for playing Pokemon Go here.)

So, this morning, my aunt posted this: 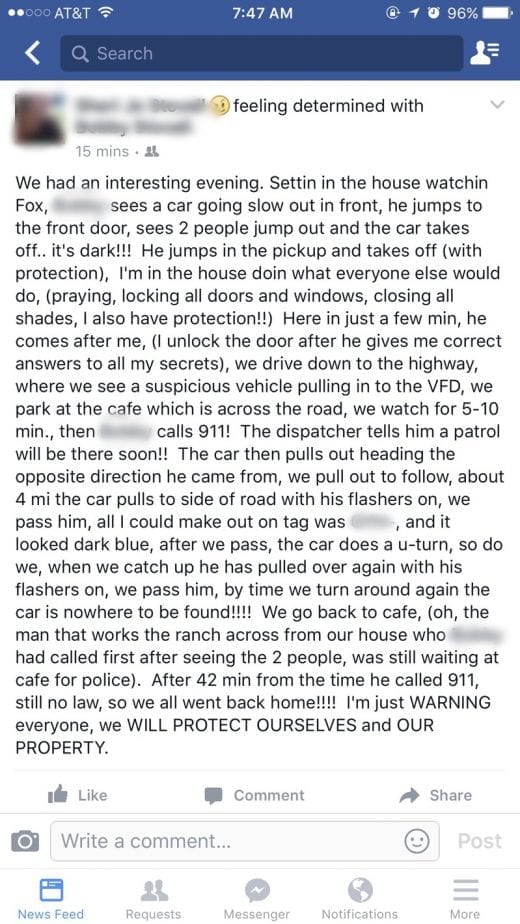 (I kid you not, this was an actual post. They were watchin Fox, they were running around “with protection” I can’t MAKE THIS STUFF UP PEOPLE!)

Since we can’t stop playing, my cousin instantly recognized this as Pokemon Go players. And, since she didn’t want her dad to accidentally shoot someone who was just trying to play some Pokemon, she let her know, to help her out. 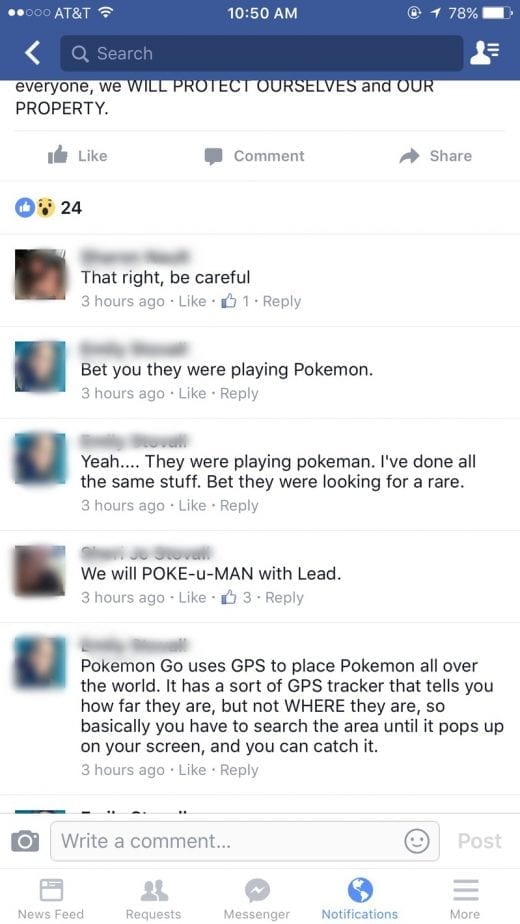 Yeah, she actually responded that she was going to “POKE-YOU-MAN with lead” that happened people. THAT HAPPENED.

Totally reasonable. Trying to keep people from getting shot, right? 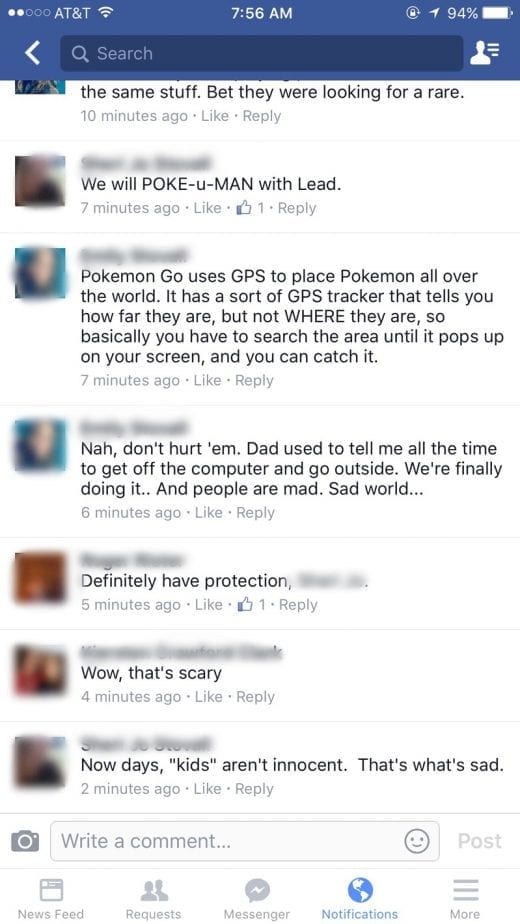 But, my cousin, still being reasonable, realized that she should take this to text, so as not to embarrass anyone any further. After all, my aunt just didn’t have all the facts, and again– we are trying to keep people from getting shot. (Remember, nobody has gone onto anyone’s property– these kids are just running down the road and stopping at the local VFD.) 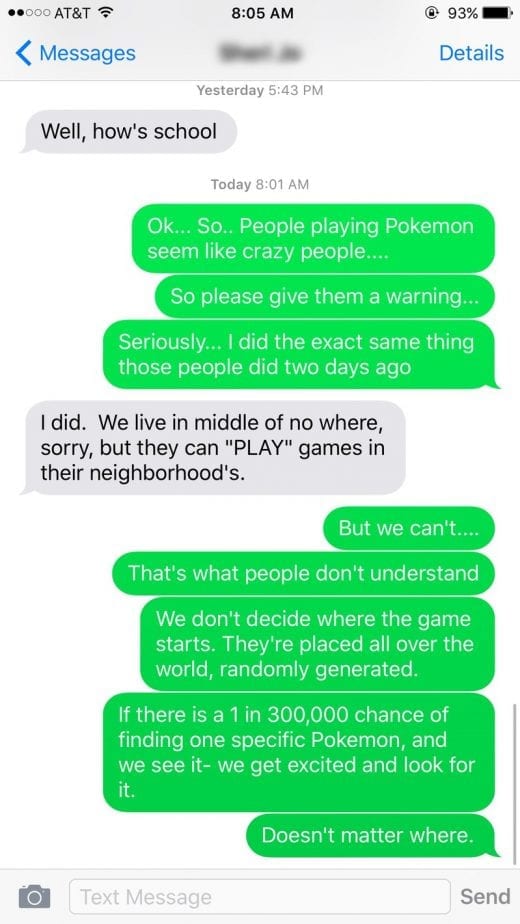 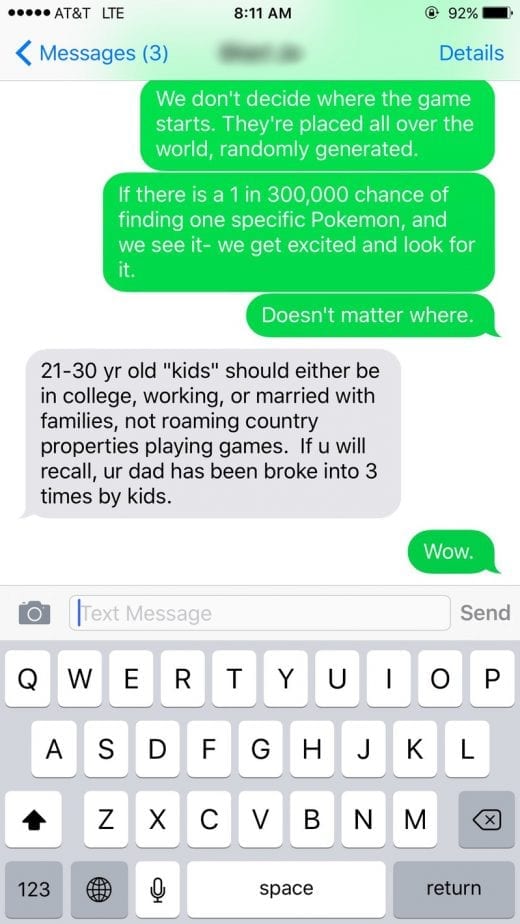 So, there’s that. Remember folks. Not everyone is into our little Poke-fun. So, BE SAFE OUT THERE.

You know what really angers me about some of the aunt's comments? The fact that she assumes that if I play Pokemon Go that I can't possibly be a productive member of society. I work 40 hours a week, I'm married, have a mortgage and a 401k. If I want to freaking wander around on public property chasing after imaginary monsters in the dark I'm gonna do that. I really take umbrage with the idea that she and a lot of 'adults' like her seem to think they can tell me what I am allowed to do with my free time. I don't poke my head over her fence and tell her that gardening is a waste of time because all the flowers are going to die eventually. I think sports are dumb. I don't get them. Do I think we should stop people from playing basketball just because it doesn't appeal to me? No. Because I'm not a jerk face.

But players do need to realize several things before being offended that some of us don't think this game is a good idea. Many ARE trespassing on private property, not watching where they are going and almost getting hit by cars because they aren't paying attention to where they are! NOBODY should be playing while driving, ever!! Many places have vandalism problems from gang members, so if I see a group of people wandering around or driving and stopping numerous times, most of us will be suspicious!! My daughter works in a hospital, and there are players walking the halls trying to find "stuff" from the game! This violates HIPPA privacy laws big time!! They had to hire extra security guards to escort people from the building! So it IS getting out of hand, not everyone plays or even likes the game, so players need to be more respectful of other people!!