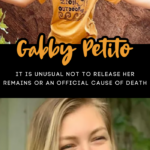 If you don’t know who Dr. Michael Baden is, can you really call yourself a True Crime Aficionado?

He’s only the most famed forensic pathologist around (That may just be my opinion, but he’s pretty well known!). You know him as the host of HBO’s Autopsy, and the dude is hella smart.

He has now chimed in about the Gabby Petito case, and what he has to say is pretty interesting, indeed.

It’s been a couple weeks since it was announced that the remains found near Grand Teton National Park in Wyoming, and the FBI has yet to release her remains OR give an official cause of death in her case.

I mean, we know it was a homicide — they ruled out suicide, accidental death, and natural death — but they haven’t made an official announcement as to the actual cause of her death — they were waiting for final autopsy results — and Dr. Baden says that this is rather peculiar.

I think the FBI would be very cautious about things because they don’t want to make a mistake. Whatever reasons they’re withholding, it is very unusual.

He had plenty more to say on the matter.

I think that the only reason would be, you’re concerned that you’re missing something, but that should not be a concern, because whatever is needed to investigate the death from the point of view of the medical examiner will be seen, documented and could be retained

For instance, if someone died from organ failure, they could retain that organ. But, to hold an entire body is highly unusual.

Dr. Baden went on to say, “In 2021, where anything of value can be document[ed], retained, tested on day one or two or three, there’s no reason to keep the whole body from the family.”

I mean, if I were the family, I would be freaking TF out on a grand scale.

“Teton County Coroner Dr. Brent Blue found in his initial determination that Petito, 22, was the victim of a homicide, the FBI’s Denver Field Office announced on Sept. 21.” Dr. Baden says that this is backwards. Usually the cause of death is released first, and the actual manner of death would be released second — or at a later time altogether.

Usually, if one thinks of other deaths, high-profile or not, the cause of death is certainly revealed. Sometimes, sometimes the manner of death is held up.

For example — a person could die of asphyxiation, but the manner of death could still be suicide, homicide, or natural causes. Same if it were a heart attack or a drug overdose.

Now, what they’re saying is, whatever they found, they’ve ruled out accidents, suicides or natural deaths that could cause it.

Now, it is important to note that Dr. Baden is NOT a part of this investigation. He is strictly talking hypothetically from his experience as the chief medical examiner in New York City and the chief forensic pathologist for the New York State Police.