FEMA Is Sending Generators, Water, And Blankets To Texas and It’s About Time 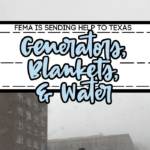 As millions of Texans are still without power and water, FEMA is sending in some help.

Where I live we are currently on a boil water notice, and while it’s a pain, we are VERY lucky to have water. We are also in rolling blackouts, but again, we are some of the lucky ones.

Many Texans have been without power and water for many days. Pipes have burst, flooding their homes. Children and adults are in the hospital with Carbon Monoxide poisoning.

People are dying. Livestock is dying. People are laughing and I don’t understand what is humorous about any of this.

FEMA will be sending generators, water, and blankets to help Texas. They are also shipping diesel to help because fuel is running out all over the state.

preparing to move diesel into the state to ensure the continued availability of backup power, which of course is a major issue on the ground to key critical infrastructure, including communications, hospitals and water.

According to the Houston Chronicle, a Federal Emergency Management Agency spokesperson said the agency has sent 60 “very large” generators to the state to help keep hospitals and other crucial infrastructure online.

Even though we seem to be through the worst of the storms, there is still a ways to go before things are back to normal with power and water.

12.0Kshares
'Underwear Bras’ Are The New Hot Fashion Trend And It’s Actually Kind of Cute
← Previous
The Latest Person To Put Gorilla Glue In Their Hair Has Finally Removed The Glue And Now People Want Their Money Back
Next →
Click here to cancel reply.

I need light and water.

I need heaters and, water and blankets.