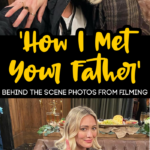 Filming has finally started for the reboot and Hilary Duff stars as Sophie!

Sophie (Duff) is telling her son the story of how she met his father: a story that catapults us back to the year 2021, where Sophie and her close-knit group of friends are in the midst of figuring out who they are, what they want out of life, and how to fall in love in the age of dating apps and limitless options.

Hilary took to the internet to share some images taken from her first day on the set, so we get some behind-the-scenes looks at the new television show.

Is it just me, or is that bar a bit familiar?

The executive producer of the show, Isaac Aptaker, also got in on the behind-the-scenes photo action.

Francia Raisa is one of Hilary’s co-stars and she shared a selfie of the two on the first day of filming looking super cute.

The official Instagram for ‘How I Met Your Father’ has also shared several behind-the-scenes images.

Are you excited to watch ‘How I Met Your Father’?