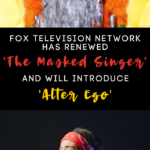 I am so happy, because Fox has announced that The Masked Singer will be coming back this fall — and I’m betting it will be bigger and better than ever!

I know, I know, we haven’t even finished season 5 — the season finale of The Masked Singer will air on May 26th.

Who do YOU think will win, and who is behind the mask?

Fox is ahead of the game, and has already announced that the spectacular celebrity singing show is coming back for its SIXTH season later this year.

It’s kinda hard to believe that there are still any celebrities left out there who are willing to put on a crazy costume, and sing their hearts out for the judges.

Luckily for all us die-hard fans of The Masked Singer, the B-list celebrity pool has produced more fruit, and there is a whole new cast coming this fall!

I can’t wait to see what over-the-top costumes they have in store for us in the SIXTH season!

But Wait!! There’s Even MORE Good News From Fox!

The OTHER good news is that the Fox network is keeping it unscripted on Wednesday nights, with a NEW show coming to Fox that will air at 9pm, right after The Masked Singer.

This show is going to be called Alter Ego, and the premise sounds pretty cool.

The show is a singing competition where singers from all walks of life won’t perform as themselves. Rather, they’ll be given the chance to show how they’ve always wanted to be seen, creating their dream avatar alter ego to reinvent themselves.

Not much else is known about the show as of yet, but really, what more do you need to know?!?

Wednesday night this fall is about to be THE night for alternative television on Fox!

Tune in to watch The Masked Singer at 8pm, followed by Alter Ego at 9pm.