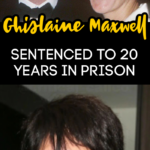 This has kind of been a long time coming, but Ghislaine Maxwell has been sentenced to 20 years behind bars for her role in the Jeffrey Epstein sex trafficking scandal.

He was a financier who ran in the same circles with celebrities, politicians, and royalty.

Essentially, the man offered up young girls, to men of wealth, as sex objects.

Per the indictment of Jeffrey Epstein, “over the course of many years, Jeffrey Epstein, the defendant, sexually exploited and abused dozens of minor girls at his homes in Manhattan, New York, and Palm Beach, Florida, among other locations.”

He even had a private island in the U.S. Virgin Islands that was nicknamed Pedophile Island by the locals. As you can imagine, bad things happened on this island.

Jeffrey Epstein committed suicide while in custody in 2019.

Why was Ghislaine Maxwell sentenced to 20 years in prison?

Ghislaine was Epstein’s long-time girlfriend, and she supposedly helped Jeffrey in his sex trafficking endeavors.

According to TMZ, 4 women — who were girls at the time — “told the jury Maxwell recruited and groomed girls for Epstein to abuse and sometimes even joined in on the abuse.”

Y’all. I can’t even. This story is just awful.

Maxwell had many opportunities to come clean, but instead continued to make choices that caused more harm. She chose to lie about her behavior, causing additional harm to all of those she victimized.

Annie Farmer, on of Epstein’s victims

On top of her prison time, Ghislaine will have to pay a $750k fine and spend 5 years of supervised release once she’s released from prison.

Her legal team is saying that she was a scapegoat for Jeffrey, but y’all, she knew what she was doing.

If you want more information on the Epstein story, you can check out JEFFREY EPSTEIN: FILTHY RICH. It’s on Netflix, and it will make you hate the man.