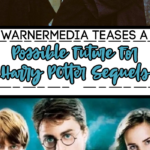 The trio of wizards from Harry Potter might be coming to the big screen once again.

The CEO of WarnerMedia has hinted at a possible future for Harry Potter sequels and more specifically, saying there is “a lot of fun and potential” with the relationship they have with J.K. Rowling!

As you all know, J.K. Rowling is the creator of the Harry Potter realm who wrote seven novels that were turned into eight successful films, alongside a very big fan base consisting of Slytherins, Hufflepuffs, Gryffindors, and Ravenclaws.

According to the Hollywood Reporter, Jack Kilar spoke about the future of Harry Potter during a virtual meeting at the Morgan Stanley Technology, Media and Telecommunications conference in which he stated,

“There’s this little thing called Harry Potter, which is one of the most beloved franchises.”

“And we’re incredibly thankful to be able to partner with J.K. Rowling and so I would argue there’s a lot of fun and potential there as well, Jack Kilar said.”

Unfortunately Mr. Kilar did not elaborate any further on his previous comments, so we can only hope from here on out that there are Harry Potter sequels in the works!

So Potterheads, it looks like the future is bright but just incase, maybe we can find a few good luck spells to cast under our breathe to speed up the process.