I’m a bright woman. If you’re reading this, you probably are, too. So know that I’m not writing this with pride, but with the great chagrin that comes from doing absolutely dumb-dumb things from time to time and feeling like we have to get them off our chests. My most recent dumb-dumb thing? I brushed my teeth with Desitin. 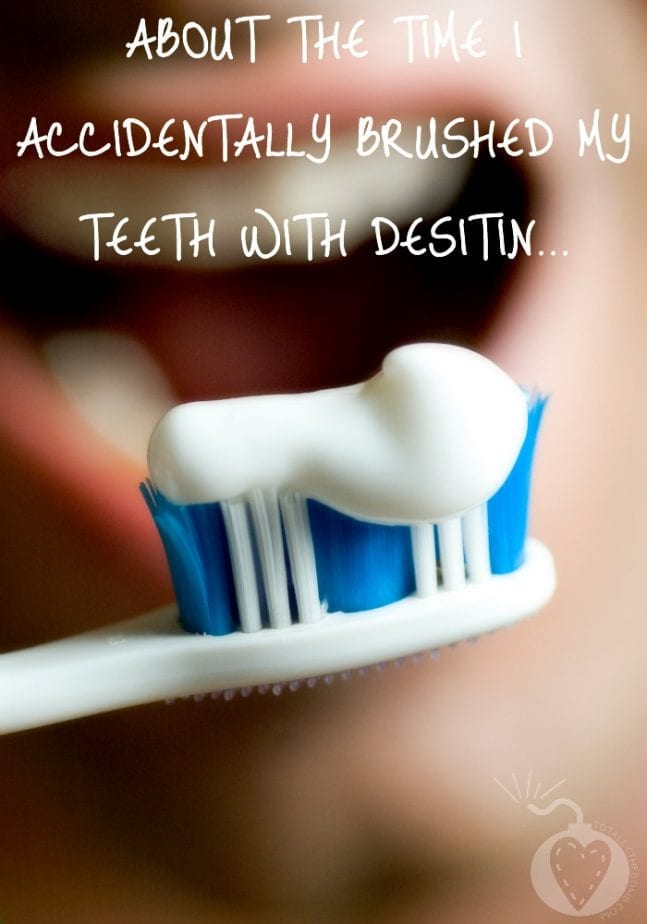 It was one of those mornings where things were already off to a bad start from the word go. We’d been having bad storms (hello Texas hail) and the power was knocked out. No problem, except that I had an early morning appointment I HAD to make it to. I figured the power would come back on in no time, so I shuffled off toward the bathroom with plans to do my best taking a shower in the dark, and deal with the clothing issue with my iPhone flashlight if it came to that.

The shower was cold.

It didn’t dawn on me until I got into it that no power meant no heat for the shower.

Or at least that’s what I thought when I shivered under that icy spray. I found out later that it was cold because the water heater went out overnight, but that was a different problem for a different day…

As quickly as I could, I scrubbed myself, washed my hair, and forwent shaving, then hopped out and into the warmth of my nice, big, comfy robe and slippers. Good. Wrapped my hair in a towel, grabbed my toothbrush and then IT happened.

Until it happened, I never realized how much a tube of Desitin feels like a tube of toothpaste. The answer is: a lot. Especially when your fingers are already cold and slightly numb from the coldest shower ever.

The weird thing is it takes a minute for your brain to kick in and realize that it’s Desitin and not toothpaste. It. Was. Awful. 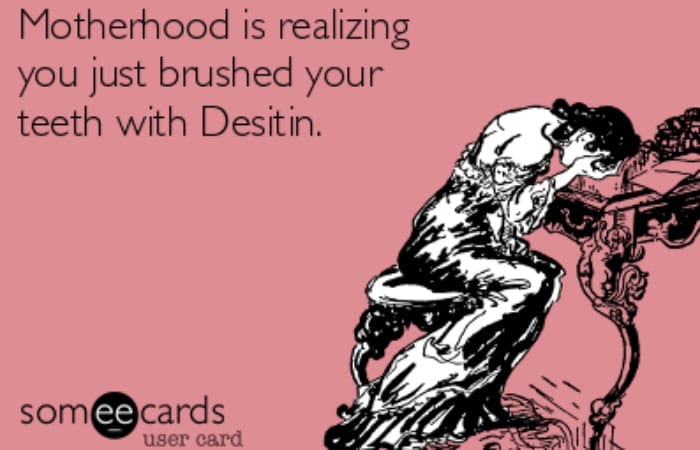 By the time I figured it out, I had Desitin smeared all over my teeth and tongue. In truth it probably only took about a second, but since I was already in a hurry, I brushed those puppies fast. Oh. My. God.

The worst taste ever. Plus, since the Desitin was now on my toothbrush, I had no way to rebrush my teeth to get the taste out.

That stuff is waterproof. It’s perfect for diaper rashes because it literally forms a barrier to keep water out. But the one time I really REALLY needed water to get in, nothing worked. I scraped my fingernails over my tongue. Used wads of toilet paper. Tried just mouthwash. Nothing got that stuff off.

To this day I swear SWEAR to you I can still taste Desitin when I close my eyes. It is not good.

Finally, I used a wash cloth and managed to get as much of it off as humanly possible before heading out to Wal-Greens to buy a new toothbrush.

All I’m saying is, do yourself a favor: if you’ve got Desitin in the house, store it as far away from the toothpaste as humanly possible. This is not a mistake I’ll ever forget, nor is it one you’d ever want to experience.

Tell us about your own ‘whoops’ moment in the comments below!

Just did the same. Only I realized it at my front teeth. I went ahead and washed my toothbrush with soap. Same with my teeth doing my best not to get soap in beyond my teeth. Ugh never thought that would happen.

This just happened to me, don't recommend it either.

I did the same thing, except my power was on lol

Yep I did it and all I can say is it’s great for a rash. Water doesn’t move it at all!!!