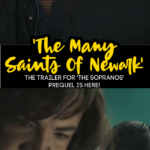 It has been so long since ‘The Sopranos’ series ended, I’ve watched the entire series several times over.

I love shows about the mafia and serial killers, and I am super excited to watch ‘The Many Saints of Newark’, which is the prequel movie to ‘The Sopranos’!

The first trailer was released today and my mind is blown!

What I didn’t realize is just how much he looks like his father!

They’re like carbon copies of each other, which makes this casting call brilliant!

It’s a profound honor to continue my dad’s legacy while stepping into the shoes of a young Tony Soprano. I’m thrilled that I’m going to have the opportunity to work with David Chase and the incredible company of talent he has assembled for The Many Saints of Newark.

The new movie is based on the events that happened before ‘The Sopranos’ and is a film instead of a series.

From looks to mannerisms, Michael Gandolfini has totally brought his father back to the screen!

‘The Many Saints Of Newark’ is set to be released in movie theaters as well as on HBO Max October 1st, 2021!