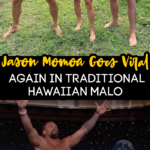 Jason Momoa and his bare butt are viral again.

After a recent interview with Jimmy Kimmel Live, Jason explained that he has worn the Hawaiian Malo every day while preparing to film the new series Chief of War, and even stripped down to show the piece of clothing on live television.

Well instead of live television, Jason rather took to Instagram to show his bare butt again.

The collection of photos show Jason dressed in the traditional Hawaiian Malo while showing martial artist Gordon King Ryan around the island, convincing him to also wear the traditional cloth and get matching tattoos.

“So my new bro, he’s fully Hawaiian now,” Momoa said in an Instagram video. “He got tatted, he’s got his malo on, we got him drinking mananalu.”

Near the end of the video both Jason and Ryan simultaneously turn around to admire the view, showing their rear ends.

Chief of War is an upcoming new series that tells the “the epic and unprecedented telling of the unification and colonization of Hawaii from an indigenous point of view,” according to Deadline.

The new television show is set in the “late 1700s, the 18th century, right when the white man showed up,” Momoa explained to PEOPLE.

Momoa also made sure to stress the importance of knowing and understanding Hawaiian history and culture, “for so-called America, well, you should know some of these stories,” he said to PEOPLE.