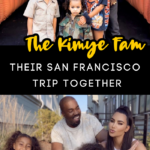 Kim Kardashian and Kanye West might be getting divorced, but that doesn’t stop them from being excellent co-parents to their four kids.

Over the weekend, the Kardashian-West family went on vacation TOGETHER to San Francisco. Not only was it a fun-filled vacay for the little family, but the city holds special sentimental memories for Kim and Kanye.

San Francisco is the place where Kanye proposed to Kim way back in 2013.

Eight years ago, Kanye flew in the reality star’s friends and family for an epic proposal at the home of the San Francisco Giants, AT&T Park (now Oracle Park).

Now the estranged Kimye family is making new memories in The Golden City.

Kim flew in from New York, while Kanye and crew joined her on Friday night for a whirlwind art excursion to the famous City by the Bay.

Kim, Kanye, North, 8, Saint, 5, Chicago, 3, and Psalm, 2, took the city be storm, sharing a family breakfast and then hitting the Asian Art Museum for a private art tour — of course, they went before it opened to the public.

Can you just imagine the commotion the Kardashian-Wests would bring to an open museum?!?

They are getting along great, and it was their first public outing together as a family, reconfirming that they are in lockstep when it comes to co-parenting and putting their kids first.

The fam might have been together Saturday morning, but by Saturday night they had gone their separate ways.

Kanye went to Las Vegas, where he held a listening party for his newest album, Donda, while Kim and the crew headed back to Los Angeles.

It is great to see that they can still stay close and enjoy each other’s company, even if they no longer live together as a family.