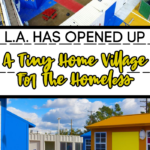 The city of Los Angles has done a deed all major cities should accomplish and that is, housing the homeless.

A colorful village of 40 tiny homes has had the opportunity to open in L.A. to house the homeless for people that are currently living on the streets!

While each 64-foot square unit home can only hold up to one or two people at once, the mission as a whole is trying to solve the cities biggest crisis which is homelessness.

Officially named the Chandler Boulevard Bridge Home Village, these tiny homes were designed and built in just 13 weeks and located in North Hollywood, according to a press release.

Since their grand opening in the beginning of the month and managed by the Hope of the Valley Rescue Mission, this tiny home village is already filled to capacity.

My heart is also filled to capacity considering there are currently hundreds of thousands of people who are homeless today and Los Angles is trying to change that number!

Each colorful home is similar to a small apartment (excluding a few rooms) which include two beds, heat and air-conditioning, windows, a small desk, electrical outlets, and of course, a front door.

Similar to an apartment complex, there are also shared laundry services, dining, meet and greet areas, play areas for pets, showers, restrooms, and even some storage options!

To make this mission even more wholesome than it already is, mental health, job training and placement services will also be provided to all residents!

What’s unique about this village is that it not only has the same look and feel as the tiny home trend, but it also features a striking color palette featuring blue, red, yellow, and white homes that makes it looks like you’re walking into Venice, Italy.

The Hope of the Valley Rescue Mission is certainly not finished here and has revealed they are working towards opening a larger tiny home village in Alexandria Park, Los Angeles coming this April.

We can certainly all learn a thing or two from North Hollywood, Los Angles.

1.5K shares
Eggo Is Releasing Stuffed Pancake Bites That Ooze With Chocolate
← Previous
You Can Plant Roses That Look Like A Creamsicle and They Are Gorgeous
Next →
Click here to cancel reply.