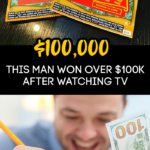 You can’t win the lottery if you don’t play it, right?!?

My family always makes fun of me whenever I buy scratchers or a Powerball card.

“You are just wasting your money!” They love to say to me.

But, I maintain, you can’t win if you aren’t playing.

But, that doesn’t stop me from playing — pretty unfrequently — but playing, none-the-less.

There is one man in South Carolina who is laughing all the way to the bank, because he has won over $100,000 by using a lottery strategy he learned on TV.

This guy was watching TLC, and happened upon a show called Lottery Changed My Life.

Instead of just blindly watching the show, as we all do, he actually paid close attention.

He used this seemingly simple strategy.

During the TLC show, he learned that you should spend $25 per week for three months playing the lottery.

Now, with MY luck, I would hit all duds.

BUT, this man won. And he won hella big.

On May 28th, he hit on the Powerball.

He wound up matching four of the five white ball numbers, and he also got the red Powerball.

According to the South Carolina Education Lottery, when you hit 3 white balls AND the red Powerball, you win $50,000. Not too bad!!

Now, there is NO guarantee that you will win ANYTHING by playing $25 a week for 3 months.

But, if you think I’m not going to try it, you’re insane.

As for the man, he’s going to continue his $25 per week gameplay until his 3 months are up. I’d be very curious to see exactly how much he wins!