Let me first start by saying that I am about to get all spoilery up in here. 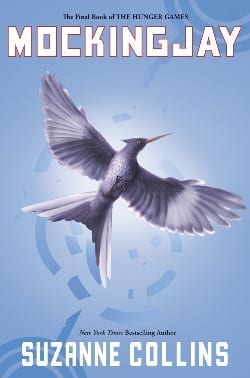 This isn’t something I normally do because I hate to give away plots to books, but I want need to talk about this story.

Seriously, no holds barred–we’re talking right down to the very last page.

Please. If you haven’t read these, just stop whatever it is you’re doing, and go now to your nearest bookstore–pick them up, and I’ll see you again in three days.

Stop reading if you haven’t finished Mockingjay or any of the other books in The Hunger Games series by Suzanne Collins.

Whew, okay now that all those non-readers are gone… we can talk.

It was greatness. I’ll just say that first. I’ve never cried so hard in a book, not even in that series when you know who killed that other guy.

When they played Real or Not Real that one last time, I’ve probably read that scene at least 50 times, and I will read it at least 50 more.

I’m totally Team Peeta. Have been from the second they locked eyes at the reaping and never once wavered. Not when Gale fed her family while she was gone, not when he kissed her on the hunting trip, and definitely not when he was Mr. Revolution Man. Nope, never. I’ve never done that before in a story. I always change my mind in a love triangle, but for me Peeta was such a great character that I never found a reason not to love him.

So, what I really need to know is, did Peeta ever find that love her had for her? The one that was so strong he couldn’t bare to see her die? The one that made him team up with the careers and give up his own life to go back in the arena? All the story says is that in time he stopped cringing as much.

Did he? Someone find a spot in the text for me that shows me he did… because I’ll go mad not knowing.

Even though I’m a Peeta girl, I still wanted Kat to make the choice between the two, and not the realization of her relief when she learned Gale was in District 2 with his good job. (Aside: WTF? What JOB?!? District 12 was Gale’s home–what job was worth him giving it up?) I need to know what Gale ended up doing for the rest of his life, and I need to know if he ever found true love, (I wanted him with Johanna) or if he spent his life pining away for Katniss and died alone.

Snow died of unknown causes? Like, they don’t know if he got trampled by the crowd or he just choked to death on his own blood? Oh, come on–Peeta should have killed that torturing bastard. And he should have done it with Katniss’ bow–I don’t know where he the arrow could have come from, but it would have made me happy to see him do it.

Instead, Kat is pulled away and we get told what happened later. I don’t care if they had to switch POV’s or what, but I really would have liked to seen the actual trial.

And now, the bombing… I still feel like I need more information! Who set off that bomb? Was it the revolution, or was it the Capitol? At first I was sure it was the Revolution, but then–I started thinking about it, and why would all those kids be herded together? I know they said it was to protect Snow, but what if it was more than that? What if– what if the two sides were working together? Were they? Was that what this was supposed to signify?

I know there had to be a death, I knew that going in to this last book. There would have to be a great sacrifice on Kat’s part in order for us to see that the spoils of victory are never pretty. But, the death of the person the entire series was based on saving?

Come on. I get it, I really do… war is tragic, and many times you lose the very thing you’re fighting for… but this is fiction, and hasn’t Kat been through enough? Gale’s off in district 2, Peeta’s wavering between hijacked and sort of being able to stand her, she lost her father all those years ago, her home is ruins… and she has to lose the one thing that’s kept her going through all these hardships?

Now, let’s talk about Peeta. What happened to him in the capitol? I know he was hijacked, but when? Was he hijacked before or after he did the interviews with Caesar? Did he really want a ceasefire? I don’t think he did, but couldn’t he have sent some sort of message to Kat in his words, morse code… something. If it was so easy to extract him, why did they wait so long? Why didn’t Kat make THAT the bargaining chip in her agreement to be the Mockingjay? Wouldn’t it have made more sense that she wanted Peeta safe with her instead of “my sister gets to keep her cat that I can’t really stand all that much, anyway?”

Did they ever admit to anyone that there was no baby? I actually wanted to see her “lose it” as a ploy for the audience during the Quell Hunger Games. I wanted her to realize she could lead the revolt from inside the arena, and really come into her own as the face of the Revolution. I hated the idea that she never really grew into that role.

So Peeta and Kat end in a simple life with their babies and the rebuilding of her broken down district, and that’s sweet–but why is neither Peeta nor Kat finishing this story in some sort of leader position? I would have loved to see Peeta overcome his hijack and Kat use her fame to help him rise to power and be the leader Panem so desperately needed. But, even if that was too much for them, and they both wanted to return to their beloved home–he would have made a great leader for District 12… Kat by his side, and giving him the children he craves because she knows they’re finally safe with their father in charge.

All that being said, I’ve never cared more about characters or what happens to them in a book, and that in itself is beyond impressive. I still love it, and just the fact that I can’t stop thinking about the loose ends is significant enough for me to add The Hunger Games my favorite books of all time.

I think that mockingjay should have platypie in it. Don't you think so?

Hey Totally the Bomb.com so what's up I freaking LOVE The Hunger Games and was very impressed with your review and words you said about Mockingly... Bye I <3 The Hunger Games

Unexpected Direction, but Perfection This was a brilliant conclusion to the trilogy. I can only compare it to "Ender's Game" - and that is extremely high praise, indeed.

When I first closed the book last night, I felt shattered, empty, and drained.

I just spent the last hour reading not only your post but all of the comments and just have to say "thank you"!! This is exactly the kind of discussion of the end of the trilogy that I have been looking for. Now I have to sit and digest all of your opinions compared to my own.

I was/am Team Peeta and definitely thought that the revolution caused the bombing. those last few chapters just went by so fast with so many people dying and so much changing. ARGH!

Feeling like I need to go re-read the whole thing again. LOL

@Tricia Meyer, I STILL think about this trilogy all the time... so that's DEFINITELY saying something, right?

But yeah... the third book just broke my heart. I am SUCH a happy endings kind of girl, and I think--in the end-- that's what I was really searching for.

I'd love to hear your opinions once you have time to think about it all. It's definitely something you have to digest.

I was totally torqued that so much of the ending was either skipped or freaking told in hindsight. After everything I experienced with these characters, I wanted to live those final moments with them. I was also upset that Katniss passed out before storming the castle when Prim got blown up. They were building up to a scene whereby she would try to kill Snow, almost fail, and Peeta would help her at the final moment. All said and done, none of that posturing made one bit of sense. Not a lick. The entire last book changed NOTHING. She ended up with Peeta, they lived in District 12, and had freaking kids. Woohoo! She could have made that the end of book one and be done with it. And WTF with District 13? She did the same sh1te with that one. At the end of the second book, you're left wondering if 13 is a myth or real. But then in the beginning of book 3, they're already in 13, living their lives. Boy that was one suck way to intro it. Ugh. So many things. It's like she just wrote the final book to get the damn thing over with.

@jason, YES! The first one was GREAT, I mean--top three books I've ever read. Book two? Not horrible, but semi-interesting.