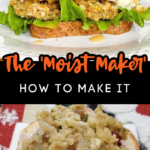 Any fan of the show Friends knows about the famous “Moist Maker” sandwich, which Ross takes to work, and someone snags right out from under him. (Episode 5, Season 9)

This sandwich was made famous by the Geller family, and is — in his words — the only thing that Ross has going for him at the moment.

Now, this sounds like one hell-of-a tasty sandwich, and I can’t really blame Ross for going berserk-o when he realizes, not only has someone stolen his “Moist Maker,” they didn’t even eat it all! He found the remnants in the trash.

If you have anywhere near the amount of leftovers after your Thanksgiving meal that I have at my house, this sandwich will be super simple to make.

Lest you think I had ANYTHING to do with inventing this sandwich, I did NOT. I am simply passing on the perfection that this sandwich recipe has to offer.

You aren’t getting the OFFICIAL recipe here, you are just getting my interpretation of the sandwich from the show. LOL!

This sandwich not only has a top and bottom slice of bread, but Monica places a “secret” middle piece of gravy-soaked bread to elevate the Turkey Leftover Sandwich to “the best Thanksgiving leftover sandwich ever made.”

So, how do you make this tasty “Moist Maker” sandwich? It’s easier than you might think.

Start with 3 pieces of bread. Soak one of the pieces in gravy whilst you are putting the sandwich together.

You will need to have on the ready: mayo, lettuce, sliced leftover turkey, cranberry sauce, stuffing, and of course, the gravy. I’d also use salt and pepper.

Throw one piece of bread down on a plate. Top it with mayo and sliced turkey.

Salt and pepper that bad boy to taste.

Top it with a little bit of gravy.

Then put that delicious gravy-soaked piece of bread on top.

Now add the stuffing and top it with some cranberry sauce.

Now add the lettuce (Or just throw it in the trash — which is what my husband would do!).

That’s pretty much it!

Now you better protect that bad boy like the precious meal that it is. Don’t leave it in the fridge at work, because as we learned from Ross, it can disappear!

You can get the OFFICIAL recipe for the “Moist Maker,” as well as many other Friends recipes from The Official Friends Cookbook, available now on Amazon.