I suppose I’d always imagined that if I ever made a late night trip to purchase a humidifier it would be as a last ditch effort to comfort a sick kid. As I pulled into the Wal-Mart parking lot at 10:45 PM I realized I was half right. But the sick kid was my husband. 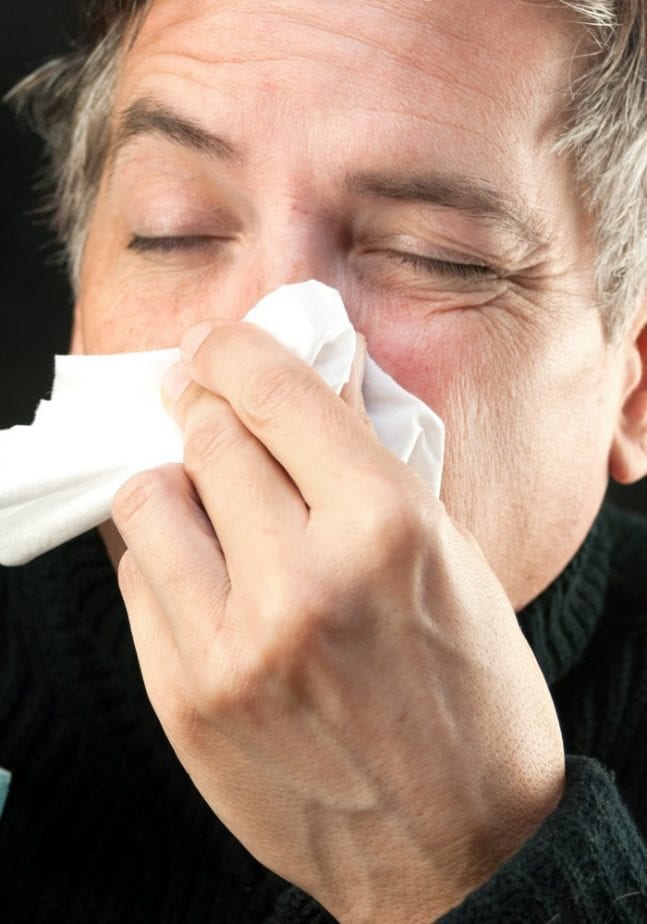 My Husband Isn’t a Baby When He’s Sick. He’s In Denial.

Look, I hate stereotypes. They boil down complex thinking beings into living memes. “Don’t trust the wife with money because ALL women will just blow it on clothes!” and “The only thing ALL men think about is sex!” It is a crude and unfair practice…which makes it all the more infuriating when a stereotype is right.

My husband isn’t a baby when he gets sick. He’s in denial.

My husband is legitimately one of the smartest people I know. He’s well read and well spoken, but when it comes to his own health he’s a moron. He can have snot running down his nose, bleary eyes, and flush with fever and tell me it’s just allergies.

Even that admission is a win for me. One spring, early in our courtship, he displayed all the symptoms of a particularly acute case of seasonal allergies. He disagreed. He’d never had allergies. Also, he wasn’t sick. So he’s sitting on the couch, deep into his fourth day straight of coughing and wheezing. But no, nothing is wrong with him. He was so miserable it was making ME miserable! I kept offering him allergy medication but he turned me down flat. So I threw up my hands and went to bed.

Later that night he woke me up around 2 AM. Defeated, red nosed and watery eyed, he asked where he could find the medication. After that he started taking over the counter allergy meds regularly when his eyes started itching.

This week he’s been really congested. He’s been popping allergy medicine like it’s candy but he still feels bad. He even took a couple of decongestants. When they didn’t work immediately he deemed them worthless. I suggested that perhaps he was actually sick.

Not so, according to him. He has a very specific list of conditions to deem himself sick. ‘Sickness’ is only a valid diagnosis if he’s nauseous. Everything else is just a sliding scale between feeling ‘ooky’ and allergies.

That was when I suggested the humidifier. Regardless of the source of his symptoms, a humidifier would help is congestion. He was optimistic when I set it up in the living room. But soon the humidifier also disappointed him. When I woke up in the morning he had moved the it into the bedroom with him, except he’d placed it on the far wall away from himself. And turned it off. So the best time and place for him to use the machine, in the closed bedroom and asleep, he turns it off because it ‘wasn’t doing anything’.

See, this is why I am not a nurse. I wanted to strangle him. Instead I said, “Even if you don’t think it’s working, what does it hurt to have it on?”

He didn’t have a response to that. So I refilled the machine, moved it to his side of the bed and left for work. Later he admitted that maaaaaybe he felt better when he woke up. But since he re-congested a little while after getting up it must not have done anything.

Guys….humidifiers aren’t magic. They aren’t even a cure. They are just supposed to make you feel better by soothing your poor overworked sinuses! And here’s the thing: even if he was suffering from allergies, they can totally turn into a legit upper respiratory infection! I guess we’d both be right, then. Thanks, babe.

But he’s a grown man. He’s allowed to go for the gold in the stubborn Olympics. So, I’ll keep feeding him soup and handing him Kleenex because I love that boob. Then, when he’s all tucked into bed with his ‘definitely not a fever’ and ‘useless’ humidifier humming away in the corner, I’ll write blogs and vent to strangers on the internet. That usually makes me feel better.