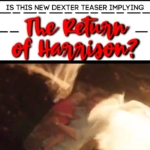 If you’ve been reading any of my posts about the return of Dexter in this newest season, then you’ll know what my dream is for the season.

I want Dexter to be reunited with his son Harrison and of course the gorgeous Hannah McKay!

Seriously, that would just be the ultimate ending to the Dexter series!

I mean Harrison was found sitting in his mothers blood just like Dexter was as a child.

Wouldn’t it be possible that Harrison had his own “dark passenger” to deal with and needed his fathers help to learn “the code”?

I think that would be the perfect ending of this newest and final chapter in Dexters story.

I mean, that last episode of ‘Dexter’ just wasn’t the ending that us fans deserved at all.

Thankfully ‘Dexter’ can give us the ending we deserve and I expect them to really do it up!

We’re getting a 10-episode revival with Michael C. Hall back as Dexter, and I will be judging it HARD!

The newest teaser for the new season of ‘Dexter’ is a super short clip, but it implies SO MUCH!

It shows an unseen person tossing a photo of Dexter and Harrison into a fire.

Harrison would be a teenager now and he may be getting his own killer urges.

Of course, this is me speculating and hoping, but there is not any definite word on the storyline for the new and final season of ‘Dexter’.