Netflix’s New True Crime Movie Is So Horrific, Most People Say They Can’t Finish Watching It 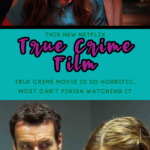 True Crime Films are all the rage right now. Something about unfolding a mystery is appealing to most these days.

But one of Netflix’s latest films is so gruesome and devastating, that most can’t stand to watch it. It follows the abduction of Lisa McVey, who was kidnapped and raped in the 80s.

As of right now, this movie is not available on the US Netflix, but can be found in the US via video on demand. But you may not want to find it.

This story is so traumatizing that even just reading the Wikipedia summary of the movie is enough to leave you horrified. This girl endured so much by the hands of a serial killer, but what happened next was even more traumatizing.

She was able to use reverse psychology to escape her captor, but when she arrived to safety, no one believed her. This is actually a Lifetime movie from 2018 that appearing on Netflix. With it being based on a true story, this whole thing is just plain chilling.

This was just released on the UK Netflix and shot up to the #1 spot immediately. But the feedback has been very concerning. Many took to Twitter saying they couldn’t finish watching it because of the horrific details.

The good part about all of this, is that the victim survived. She also helped the police find her captor and to this day helps the police with investigating sex crimes.

Whether you’re brave enough to watch this movie or even read up on what happened, you have to admit, it is incredibly amazing that this girl was able to escape and help others through her trauma.

1 shares
Aldi Has Three Flavors Of Sweet Cocktail Hummus And You Are Going To Want To Try Them All
← Previous
You Can Get An Inflatable Color Changing Dolphin That Looks Like It's Dancing In Your Pool
Next →
Click here to cancel reply.