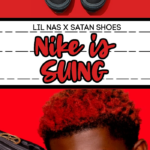 I’ve seen a lot of talk about the “Satan Shoes”, it really disturbs me. A shoe that has human blood added to it?

The base for the shoe is a Nike shoe, which has led many people to think that Nike is the maker of the “Satan Shoe” and they are not.

Nike has been called out all over the internet by people over the shoe design and contents.

These are customized Nike Air Max 97 shoes, so yes, while they started off as a Nike shoe… they did not customize them into what they were sold as.

The shoes were customized by MSCHF Product Studio. They added a pentagram, a Bible verse about Satan, and they say one single drop of human blood in each shoe.

The company created 666 (the number of the devil) pairs of the customized Nike shoes and they sold out fast! They were selling for over a thousand dollars even…

TMZ reported that Nike claims that the company is misleading people into thinking that Nike designed and approved of the Satan shoes. Nike wants people to know they had nothing to do with this.

MSCHF buys the shoes from Nike, then they have artists that work out the design and modification to customize the shoes before reselling them to the public.

Nike Did Not Produce The Shoe Design

Nike is suing MSCHF for trademark infringement because the NIKE Swoosh logo is still featured on the Satan Shoes. This makes people believe that Nike made the shoes to look like this.

They are suing for damages and they also want the judge to block the sales of the Satan shoes.

Many parents are also banning Lil Nas X from their children after this craziness with the Satan Blood shoes and his new music video… man things are weird!

I’ve already read a ton of posts where people have already dumped support of Nike. I’m not sure how they come back from this one…

Y’all can keep your devil shoes… I’ve watched too many scary movies to mess around with any of that! I’ll wait for this version…

3shares
Scientists Think They May Have Discovered A New Covid-19 Treatment
← Previous
You Can Plant Mushrooms That Glow In The Dark In Your Yard
Next →
Click here to cancel reply.