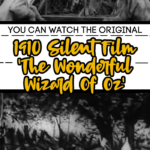 I’m a huge fan of what I thought was the original ‘The Wizard of Oz’ movie from 1939. I seriously thought that was the first movie!

A column in the 8 Jan 1910 Moving Picture World announced that the Selig Polyscope Company had placed Frank Baum, “the ‘Wizard of Oz’ man,” under contract as a producer.

It turns out there is an even earlier version that is known as the oldest filmed version and it’s from 1910! It is said that it was inspired by the 1902 Broadway musical that was based on the L. Frank Baum’s novel.

“Folk lore, legends, myths and fairy tales have followed childhood through the ages, for every healthy youngster has a wholesome and instinctive love for stories fantastic, marvelous and manifestly unreal.”

They think that it was based on the musical is because Toto is not in the film. Instead, they used a character called Imogene the cow.

This was because they replaced Toto in the musical with a person dressed as a cow so they wouldn’t have to rely on a trained dog. That makes sense!

The movie is only about 13 minutes long and it is a silent film. This movie was so cool to watch and I just had to share it with you! You can watch the entire movie below!