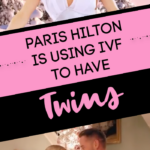 It’s baby season in the world of celebrity.

First we brought you the news that singer, Halsey, is pregnant with her first child with boyfriend, Alev Aydin.

Now, we get to tell you that Paris Hilton is trying to get pregnant. What? I know. I was a little shocked, too!!

Paris is choosing to go the non-traditional route, using IVF — In vitro fertilisation — to get pregnant. But, she is doing so for reasons that you might not even think were possible.

In case you don’t know, IVF is where an egg is joined with a sperm OUTSIDE of the body. Basically, the doctor removes an egg from the female, and combines it with a sperm specimen that is collected from the male.

The fertilized egg — embryo — is then introduced to the woman’s uterus, and hopefully it will implant, creating a baby.

So, Paris Hilton has opted to get pregnant using this procedure.

Most people choose IVF, because they have had trouble getting pregnant naturally — or — it is a procedure that can help members of the LGBTQ community, as well as single people, get pregnant without going the “traditional” route to pregnancy.

BUT, Paris isn’t going the IVF route because she is having trouble getting pregnant.

No. She is using IVF to “ensure” that she has twins — a boy and a girl, to be exact.

We have been doing the IVF, so I can pick twins if I like.

She says she learned that this option is possible through Kim Kardashian, who has had 2 of her children via a surrogate mother.

Apparently, Paris has already had the egg removal process done.

It was tough, but I knew it would be worth it. I did it a couple of times.

Paris says she is ready to have babies with boyfriend, Carter Reum, who she has been friends with for over a decade.

I’m really excited just to move on for the next step of my life and finally just have a real life. Because I really do believe that having a family and having children is the meaning of life. And I haven’t got to experience that yet, because I didn’t feel like anybody deserved that love from me, and now I finally found the person who does.

Now, I’m curious to see if Paris opts to carry the babies, or use the aid of a surrogate. We will let you know as soon as we learn more.