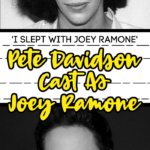 Chances are, if you grew up in the 70s and 80s, you may be a pretty big Ramones fan. Or maybe, like my kids, you just have cool parents that played awesome music for you!

The Ramones started way back in 1974! It was a year of great births, from the Ramones to my own birth!

This year is the 20th anniversary of the death of Joey Ramone (Jeffrey Ross Hyman). He was born in 1951 and died from lymphoma in 2001. All founding members of the group have passed away.

Joey cofounded the band in New York, and they were one of the first pioneers of punk music. They played shows from 1974 up until the band broke up in 1996.

Written by his brother, Mickey Leigh

‘I Slept With Joey Ramone’ is a biopic and chronicles the life of Joey Ramone. It’s based on the memoir written by his brother, Mickey Leigh. Mickey will also be an executive producer of the film.

When you share a bed with someone — and not just a bed, but a childhood, a family, and a lifetime — you know that person better than anybody else. Mickey Leigh not only collaborated with his big brother’s band — he has irreplaceable memories of and insights into Joey Ramone, having supported him when no one else would and witnessed him overcome adversity in the most dramatic way. ‘I Slept with Joey Ramone’ is a great rock anthem that will make an equally great rock biopic, set apart by a universal story of family.

Pete Davidson, who you may know from ‘Saturday Night Live’, will be playing the part of Joey Ramone.

Pete will also be an executive producer, along with Mickey, David Spiegelman, and Rory Rosegarten. There has not been a release date set at this time.

I’m pretty interested in watching it, what about you?