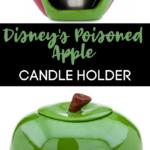 Disney’s classic tale of Snow White tells the story of a jealous evil queen due to her innocent stepdaughter’s beauty, who is then later poisoned from an apple given by the wicked queen in disguise.

Considering the iconic movie is popular during every spooky season, Walmart is selling a look alike poisoned apple from the movie that is designed to hold candles.

Similar to the color changing poisoned apple mug (courtesy of Disney),this candle holder from Walmart has the same face the Evil Queen sees in her brew before she dips the apple in a cauldron, making it poisonous.

The deadly apple shaped like the common fruit shows the cursed apple consumed by poison with a dripping design.

The green and purple apple topped with a lid featuring the apple’s stem is complete with the words “just one bite” written on the back; the last few words Snow White hears before she falls into a deep sleep.

The back of the apple is where you can insert your favorite glowing tea light candle to illuminate the room and the poisonous apple.

You can currently find Disney’s poisoned apple at Walmart for $37, just don’t let anyone take a bite out of it.

1 shares
Here's Everything We Know Starbucks Is Launching For Fall So Far
← Previous
This Mom Caught A Creepy Voice On Her Baby Monitor But It Didn't Stop There
Next →
Click here to cancel reply.