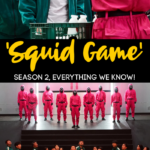 Did you watch season one of ‘Squid Game’?

If not, this is your notice to go stream it on Netflix now and then come back and read this because this post does contain spoilers.

‘Squid Game’ is a Korean dystopian thriller series that gained a huge following when it was released on Netflix in September of 2021.

In fact, it was the most-watched series on Netflix, it is THAT good!

The series even received 2 Critics Choice Awards and 3 Screen Actors Guild Awards in 2022.

Actor O Yeong-su even won a Golden Globe Award for his performance as Best Supporting Actor!

In season 1 of ‘Squid Game’ we witnessed 465 people that were in over their heads with debt and took the risk of playing a crazy and dangerous game that ended in death.

Each game they played was based on a children’s game, but instead of simply losing, they were killed when they failed.

squid game was the most physically aggressive childhood game I played in neighborhood alleys as a kid, which is why I also loved it the most. In a way, it’s the most symbolic game that reflects today’s competitive society, so I picked it out as the show’s title.

The winner of the game would win $38 million and it was something they just couldn’t turn down.

Most of the characters in the series were killed off in the first season, but many fans are hoping that some of their favorites will return in season 2 of ‘Squid Game’.

I don’t think she might come back. And also guys, I’m so sorry to say this, but I’m very happy to be dying.

The only other character that participated in the game and survived was Seong Gi-Hun who was played by Lee Jung-jae.

‘Squid Game’ season 2 has been confirmed, but we don’t have an exact date at this time, but it has been mentioned that it would release in either late 2023 or 2024.

We do know that Seong Gi-Hun, who was the only survivor in season one will appear in the sequel.

I will promise you this: Gi-Hun will come back, he will do something for the world.

They’re not releasing any plot details yet on season 2, but Dong-hyuk had the following to say:

There will be more great games, that’s all I can say. I’m just still brainstorming and collecting the ideas for season 2. I haven’t even started with the writing yet.

Humanity is going to be put to a test through those games once again. However, the way those games are played could be different. If they were capable of talking with one another, of cooperating with one another, I do agree that there could have been a possibility that we could have seen more winners. I want to ask the question, ‘Is true solidarity between humans possible?’

Dong-hyuk told Vanity Fair in May 2022

We will update you as soon as we receive more information on season 2 of ‘Squid Game’, however, you can stream season 1 on Netflix right now!