My family is Pokemon Go obsessed. This evening I strolled through the park with my daughter and husband. We laughed, played, talked and caught Jigglypuffs. (Our park has a lot of Jigglypuffs.) When we got tired, we laid on the sidewalk and looked up at the stars. It was one of those perfect summer nights that most parents dream of.

Then I came home, and on my Facebook feed I saw this.

My question to all of these people who hate Pokemon go is: If it was a beautiful day, and you were having a great time with your kid, and so was I–what makes your time better than mine?

Is it because you were kicking a ball and I had my phone in my hands? Is the park only for those sporty, fit athletic people now? Is that why you are hating on the nerds and the geeks for playing Pokemon Go? what makes your form of recreation better than mine?

I’ve been talking to a lot of people since we started playing Pokemon. I met a mother of an autistic child in tears, as her son showed a group of his peers his high level Pokemon. The whole group impressed and passing around his phone. She told me the story of how he never ever breaks his schedule, and if it gets broken a meltdown is guaranteed. One girl told him a rare Pokemon was close by, and he begged his mom to let him mix up his schedule so he could catch it.

“It’s the best thing that’s ever happened to him,” she said to me as she wiped away tears.

You see, I think that what people aren’t realizing is this: I have never been good with a ball. I have never been the kid picked for sports games. As is the case with most “nerds.” We were picked last for kickball, if at all.

We got tired of being the leftover, of not getting chosen, so we just went back home. Inside. We did this again and again until it just wasn’t worth going at all. Other kids were playing frisbee, and we were either sitting on the side, or being a hindrance to the team.

We discovered video games and computers. We discovered that we could be good at those. That we could be the finally be the king of the mountain. We played these games a lot, and we stopped exercising. It wasn’t good for us, but mental health-wise, it was better than the ball field.

This game? This game gives us a reason to go out and be in the park the same as kicking a ball gives you and your kids a reason to go there.. This game is a reason for us to talk to strangers we’ve been socially awkward around for years. This game means a lot more to me than I care to admit.

The very idea that me and and the other “nerds” is a buzzkill to your family and friends just means that all that time when we felt like we weren’t wanted in the park because we weren’t athletic or sporty enough to run a 10k means we were right. Please don’t make me right. 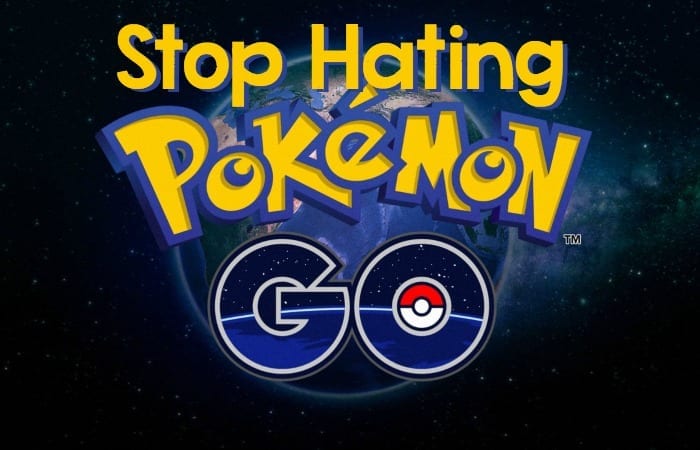 Debra @ Bowl Me Over

Anything that gets us outa the house and spending time with our family & friends works for me! Thanks for sharing your tips & info with us. Popping by to let you know I'm featuring you on #FoodieFriDIY this week so more can learn all about the fun - ain't no haters here! ;-)

Jamie I love this! I totally agree that one form of recreation is not more valid than another. Furthermore, Pokemon Go has gotten all of my kids out and walking the neighborhood with me. They are constantly on the lookout for new Pokemon and we have an absolute blast even in 100 degree heat. Thanks for sharing your awesome post with us at Merry Monday!

I love this post! Pokemon Go is gettting people outside and interacting. That's a win in my book. Thank you so very much for linking up this week at Thoughts of Home on Thursday! We love the special sparkle that you add to the gathering.