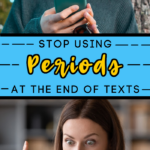 Turns out, I have been finishing my texts wrong, and I don’t know whether to *shake my head*, *roll my eyes*, or just go with it.

Now, I majored in English in college, so sometimes it’s really hard for me to not write like I’m submitting a thesis to one of my professors.

That flows over to when I send texts, as well.

Sure, I use plenty of emojis, and talk like a normal person would speak in my texts, but I ALWAYS end them with a period.

But, it looks like I am doing it all wrong.

I can’t keep up with all the new “rules” when it comes to casual writing!

Like, I REFUSE to give up my oxford comma — I’ll hold onto it until the day I day.

I am finally getting used to NOT using the “…” between thoughts — but that’s been a tough one.

BUT, I don’t know if I can give up my period at the end of texts.

It feels wrong on so many levels!

HOWEVER, new culture dictates that I should not be using the period at the end of all my texts.

Even though many of us use periods all day, every day as we write emails, reports or articles, for some reason, adding that little dot at the end of a text message shifts the meaning from “this sentence is over” to “maybe this friendship is over.”

Apparently, that little tiny dot at the end of my texts is a bit too “final.”

Take this little example, and see if you think it makes a big difference in the understanding of the text.

You could be answering someone’s text with surprise, or emphatically telling someone “NO!”

The second “No” is just a simple answer to a question.

The third “NO,” with the period, apparently seems too final — like you are telling the person that you really don’t want to continue the conversation.

Some say that the last example can construe a meaning of passive aggressiveness that wasn’t originally intended.

Now, 99 times out of 100, I don’t mean to sound passive aggressive — I’m simply being, what I consider, grammatically correct.

But, in today’s society, the tone of a text can get all jumbled and misconstrued so easily.

Have you ever texted someone, and they shoot back with “Are you mad?” or “Did I say something wrong?”

This has happened to me, and turns out, it might be because that pesky little period I used at the end of my text sent the signal that I was upset or mad about something.

NOT my intention at all!!

So, I guess we should all heed the advice, and stop using that period at the end of texts — as much as it pains me.

What do you think? Will you stop using the period?

So, does this only apply if you use the period at the end of the whole text? Or are we suppose to eliminate all the periods. I ask because I hate when no punctuation is used, I'll spend too much time trying to figure out what exactly is being said to me. I honestly believe this notion comes from people getting too effing lazy. And the lazier they get, the more texts will be misunderstood and taken the wrong way. So I don't care if it's texting wrong, I'm not giving up my periods period. #powertotheperiod

@Teresa, Correction. I hate when punctuation is not used.

@RC, You forgot your period at the end.