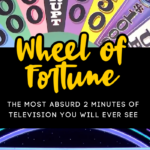 Perhaps the dumbest Wheel of Fortune segment ever to make it on TV aired on Tuesday night, and it has people — including me — yelling at their screens.

You don’t even have to be a fan of Wheel of Fortune to appreciate the absurdity in this 2 minute segment.

I know, I know. It’s easy to sit at home and yell at a TV. It’s a whole other thing to be in front of cameras, nervous, and trying your hardest not to look stupid.

It took these contestants 8 turns and 10 attempts to solve the puzzle — and the puzzle was not what anyone would consider hard.

Let’s set the scene. The contestants were told that they were guessing a “Phrase,” and the letters already appearing on the board were: “Another feather __n yo__r __a__.”

Wheel player, Laura Machado, was the first to start the ridiculous guessing game.

She pretty confidently said, “I wanna solve — Another Feather In Your Hat.”

But, it didn’t stop here.

Christopher Coleman was up next, and he guessed “G” after giving that big wheel a spin.

Spoiler Alert: There was NO “G.”

Poor Thomas Lipscomb. I just KNOW he knew the answer, but he landed on “Bankrupt.”

Then we were back to Laura. At this point, I was already yelling at the television. “Come On!!”

“I’ll solve,” she said without spinning. “Another Feather In Your Lap.” *Eye Roll* WHAT?!?

The craziness continued. Christopher Coleman next guessed, “D.” Like — where would a “D” even go?!?

That poor Thomas Lipscomb. The dude — who I KNOW knew the answer — went from “Bankrupt,” to “Lose A Turn” in the matter of 2 spins.

God help us all, the turn was BACK to Laura. She was smart enough to guess a “P,” which was the last letter in the last word.

I seriously didn’t know if I wanted to hug her or yell at her at this point. I could only say, “Bless her heart.”

Christopher didn’t even get a chance to guess next, because he landed on “Bankrupt.”

Now, Thomas — who hadn’t had a go at the word yet — spun the wheel.

Y’all!! This guy — who knew the answer the whole time — finally guessed the right answer!!

Now imagine you’re on national TV, and you’re suddenly thrown a curve and you begin getting worried about looking stupid, and if the feather isn’t in your hat, where the heck can it be? You start flailing away looking for alternatives rather than synonyms for ‘hat’

What was the correct answer to this Wheel of Fortune puzzle?

“Another Feather In Your Cap.”

The Twitter comments on this segment of comically bad television were priceless.