First off, I now TOTALLY know how to spell Caribener, so that’s a good thing. 🙂

I was given some tickler tags recently and they are like the coolest thing ever. The thing is, I am kinf of a forgetful person. I forget to remind my kid of all sorts of things on the way out the door like, that her dad will be picking her up from preschool, she’s going to swimming class later or you know… just that I love her more than anything on the planet. (Okay so I always remember that last one, but it never hurts to throw in an extra reminder here and there.

So, when the tickler tags website asked me to review their product, I was like all, “Shyeah!” 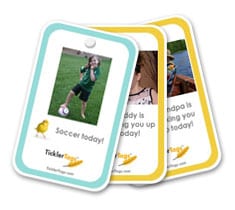 So, basically you just attach these tags to your kid’s backpack with a carabiner (I love saying that word) and you can change them out with whatever the schedule is for that day. They will EVEN make you your VERY OWN tickler tags that say anything you want them to.

They aren’t just laminated paper either, they are hard plastic like a credit card… and that makes me very happy, because my daughter and I can ruin just about anything on the planet.

Oh, did I mention that they came with a cute little feather for tickling hehe. They so did.

Oh, and she’s offering free shipping until the end of March, so HURRY and get some!

This is great. Just got my carabiner on roadeavour!