This year, I decided instead of THINGS for Christmas, I wanted my family to have TIME. So, instead of presents under the tree when we woke up on Christmas morning, there were plane tickets in stockings and packed bags already in the car.

And I will definitely be doing it again. 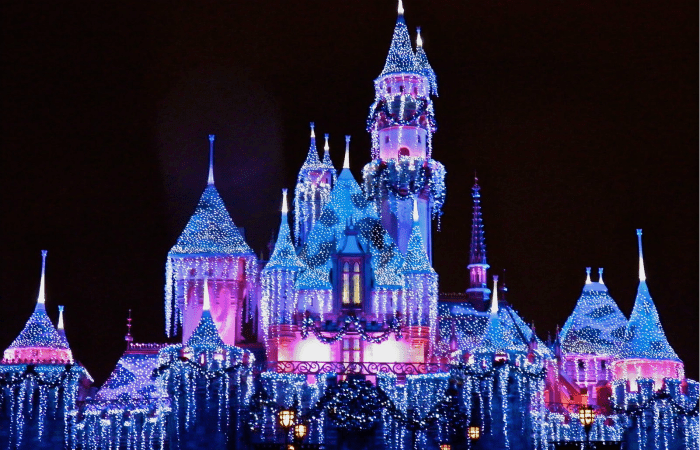 One of the big things you need to know is that Disneyland at Christmas is CRAZY crowded. We are talking wall-to-wall, crazy waits and you will end up standing in line for a long time to do the things you want to do and see the things you want to see. But this doesn’t matter AT ALL! Why? Because it’s Disneyland at Christmas, and it is pretty much the most magical thing you can experience. (And if you really want to avoid the crowds, then do Disney a couple of weeks before Christmas, before school gets out– there are basically NO lines for anything!)

(Our light up Mickey ears were probably my favorite part of the entire trip!)

When you stay, because of the crowds, stay right there inside the park– this means the Disney Grand Californian. This hotel actually has its own separate entrance right into the park, and your family will walk right out into Disneyland. It was so awesome that I actually cried a little. This is how you spend Christmas with your family.

Disney isn’t just “sort of” done up for Christmas. They go all out. One of the reasons we chose DisneyLAND over Disney WORLD was because Disneyland redoes their Haunted Mansion for Disneyland as the Nightmare before Christmas. It’s SO cool, and my daughter is a Jack Skellington freak, so this was our total reason for going!

For Christmas, my kiddo asked for only one thing, to ride the Haunted Mansion ride when it was done up for Nightmare Before Christmas. Best. Christmas. Ever. #christmas #nightmare #disney #disneyland #holiday

And, it was totally TOTALLY awesome in every way. Will we be doing Disneyland at Christmas again? Absolutely.